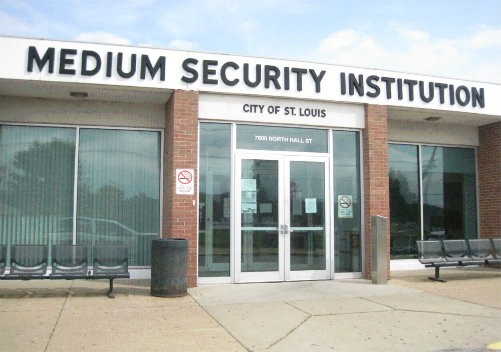 Temporary air conditioning units have brought a measure of relief to the St. Louis Workhouse and its 700+ inmates, but in the wake of mid-July's heatwave — which focused outrage over the jail's horrendous conditions — Mayor Lyda Krewson maintains that her administration is committed to reducing the population held by the 51-year-old facility.

However, that goal is unreachable without collaboration between the city and a host of criminal justice officials, and particularly Circuit Attorney Kim Gardner.

Krewson has no direct power over who gets sent to Workhouse or for how long. She can't simply order the release of non-violent inmates locked up for probation violations or adjust bond amounts for people too poor to pay their way out of minor crimes.

Probation, bond amounts, the speed of a particular criminal case — these areas are influenced by a collection of different actors, including defense attorneys, judges and probation officers. And the brunt of these responsibilities converge inside the offices of the circuit attorney.

On July 24 — the same day that five industrial AC units were delivered to the Workhouse — Krewson convened two meetings with city and state officials, as well as several judges, with the goal of devising a strategy to shrink the Workhouse's population and reduce the amount of time inmates spend languishing in its cells.

Gardner did not attend. Neither did any representative or prosecutor from the Circuit Attorney's Office.

According to the mayor's office, Krewson and Gardner were supposed to meet Friday, but that plan fell through as well. In an email, a spokeswoman with the Circuit Attorney's Office said that Gardner had previous commitments on July 24 and was not able to attend the meeting, which had been called on short notice. The two parties say they hope to meet this week.

In an interview with RFT Friday, Krewson stressed that her overall goal is reduce the population in both the city's jails. (Currently, the Workhouse mostly houses pre-trial detainees, including those arrested for probation violations. The downtown Justice Center, which holds more than 600 inmates, serves to house suspects charged with violent crimes.)

"I'm starting with the Workhouse because the people there generally have lesser charges," Krewson explains. That includes some 100 inmates locked up on technical probation violations, such as missing court-ordered check-ins or failing a drug test.

Evaluating which inmates to release, though, will require hearings and the input from defense attorneys and city prosecutors.

"I’m trying to raise the awareness of everyone in the law enforcement circle who has a role to play in this," Krewson says. And Gardner, she adds, is "obviously a very important player in this circle."

Aside from Gardner, other significant players in that circle did attend Krewson's two July 24 meetings. According to the mayor's office, a morning meeting included Public Safety Director Charlene Deeken, City Corrections Commissioner Dale Glass and a representative from the Missouri Department of Corrections. Later that day, Krewson and her staff met with three city judges to discuss ways to speed up criminal cases.

"I’m not trying to tell them how to do their jobs," Krewson says. "But we can be a convener, and we can ask people to think differently about what they're doing and to see whether, through collaboration, we can move people through the system in a quicker way."

How Krewson, the Circuit Attorney and the various stakeholders work that out remains to be seen, but in the meantime the mayor's efforts indicate a shift in her position on the Workhouse. During the contentious mayoral primary election earlier this year, Treasurer Tishaura Jones blasted the city's political establishment for letting the conditions in the Workhouse degrade to at-times barbaric levels. She made shutting down the jail a central part of her platform (ultimately, Jones lost to Krewson in the Democratic primary by just 888 votes).

Krewson served as an alderwoman for nearly two decades before stepping into the role of mayor, and she concedes that the Workhouse's problems aren't recent by any stretch. But after a record-setting heat wave, a round of protests and her own further investigations, Krewson now says that she's convinced something must be done.

"When you sit in this chair," she says, referring to the mayor's office, "you feel more responsibility to dig into the issues more deeply."