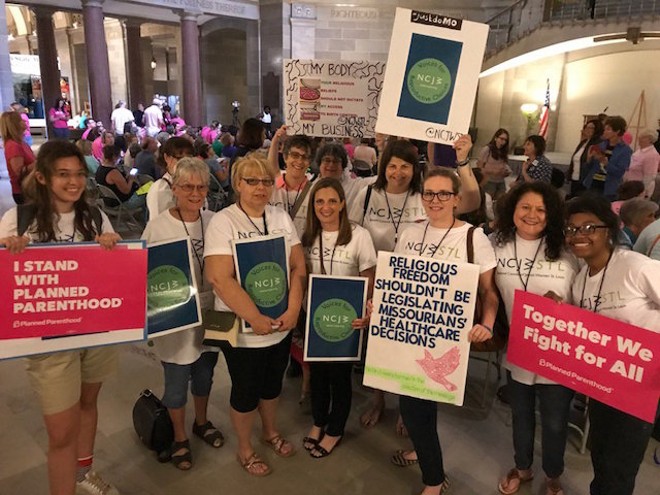 The goals of the event are to allow St. Louisans who are "outraged" by Governor Greitens' special session to show their displeasure and voice what they feel are the "real issues" that burden Missourians.

Pamela Merritt, co-founder and co-director of the non-profit Reproaction, is one of the organizers.

"There are very real, urgent matters that we need to be addressing and we've got this governor that spends somewhere around $20,000 a day pandering to the anti-abortion movement when this is ridiculous and the priorities are completely off," says Merritt.

It's not just about abortion, though. The Republican governor also allowed a bill to become law that guts the city of St. Louis' minimum wage increase — months after the increase took effect. Notes the press release announcing the event, "Greitens also acted to cut the wages of thousands of St. Louisans, as they struggle to pay rent, put food on the table, and afford basic necessities."

Merritt says the goal of the event is to allow people to "express their frustration, their disgust and concern that the issues that impact and matter the people of St. Louis are not being addressed by Gov. Greitens or by a majority of Jefferson City."

The event is expected to last for about under an hour on the street corners of Delmar and Union boulevards. Merritt explains the location of the event was chosen to take place at the "Delmar Divide" to symbolize the divide between the state of Missouri and the city of St. Louis.