When clients finish picking up supplies at Ritenour Co-Care Food Pantry, they typically schedule their next monthly “appointment” to come back for more food. However, to the dismay of the 2,000 patrons who depend on the service, the organization has stopped taking appointments for good. Its executive director, Reverend Marsha Brown, says it's “been kind of like a funeral.”

“But you guys are like a family to me,” a client says to pantry volunteers through tears upon realizing this will be her last visit.

The food pantry, which provides $1.5 million worth of food per year to residents within the boundaries of the Ritenour School District, will close August 19 — unless it can raise at least $100,000 and gain a viable number of volunteers. The pantry, which is supported by Operation Food Search and the St. Louis Area Food Bank, accounts for ten percent of the food that the food bank allocates to all of north county.

The closing will be especially unfortunate for impoverished families given current events, Brown acknowledges.

Ritenour Co-Care Food Pantry has been providing this relief for roughly 30 years. What started as a janitor’s closet full of canned goods in New Horizons Presbyterian Church (formerly known as Overland Presbyterian Church) has transformed into a large operation at 9516 rear Lackland Road in Overland. As the need of the community grew, the directors sought new ways to expand the pantry.

Brown, who previously worked for the church, helped organize a move to the current location in May 2016 because they were “popping at the seams.”

Yet despite that growth, the organization’s funds have been on the decline for a while. After the move to Lackland Road, expenses like the implementation of air conditioning units and large refrigerators put a dent in the budget. Then Brown announced she was resigning, effective September 1.

Brown cites the lack of funding and personnel, which have made her job difficult.

“We need people to come in and do some of the work we don't need to be doing,” Brown says, “or else me and the operations manager are doing the meat, driving the truck and carrying out the garbage, and I can’t do that anymore. If we get the funding I want to consider how my skills can be better used here.”

The food pantry serves 550 families a month, or about 2,000 people total. It's unique because it offers perishable food, while many similarly situated places only give canned food. The pantry provides produce, meat, dairy, eggs and other goods that would typically cost more. It also gives personal care items and even has a “lending library” for books.

The pantry operates more like a grocery store than many other operations; during six designated distribution times, clients get to pick which goods they’d like to take home. Depending on the size of family and the number of items in stock, clients can pick from a variety of foods.

“If you make it a choice people are going to take what they want but not more than they need,” says Operations Manager Ron Bickerstaff, who is also Brown’s husband. “We trust people here. This is a place of dignity and respect, and we don’t want anyone to leave here feeling worse than when they came in.”

“It’s not just the food, it’s the way they’re treated," Brown says. "You say, ‘How are you doing?’ when they come in for their next appointment and they tell you. 'My foot’s better.’ ‘My daughter is on drugs.’ We get to know people. And 2,000 people – that’s a lot to know, but you get to care about them.”

Client Tom Roussin, who’s been with Ritenour Co-Care for one year, says the organization has been a “life-preserver.” As his cost of living increases and his social security check remains the same, Roussin frequents the pantry and occasionally tries his luck at a lottery ticket or two. The other day, he says, he "only missed winning by six numbers,” assuring a reporter that if he were so lucky, he’d share the winnings with the food pantry staff. 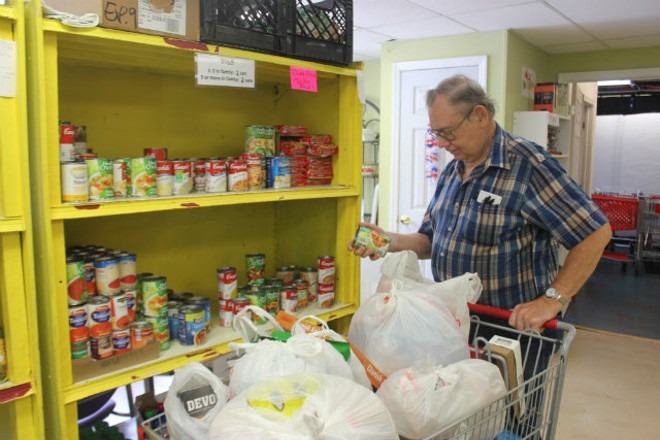 “I don’t think they really know how much of an impact they have on people's lives,” Roussin says. “I don’t get a feeling like I get with food stamps; no, this is a very caring feeling.”

And it takes a village to keep clients like Roussin coming back. Among some of the consistent volunteers is Diane who helps with the scheduling, Danny who walks from home to volunteer daily, Tom who lifts the boxes off the trucks manually, Linda, whose big personality keeps people motivated and Olivia who’s only eleven, but is smart as a whip, to name a few. Volunteers mainly help with the clients’ shopping experience and stocking the shelves after deliveries.

But they need far more, Brown says. If the organization does close, patrons will receive a list of other places to go in the area, but, Brown says, “there’s not another place like us.”

Still, Brown says that they’ve recently “had offers of significant money” from large regional leaders and big corporations. Laurie Hausmann, a two-year volunteer, is hopeful that the food pantry will get a last-minute reprieve to stay up and running.

“A week ago we were all in tears; this week we have a lot of hope,” Hausmann says. “We may have a miracle happening. Anything that affects 2,000 people this much is really important to keep going. We’ve got to find a way.”

To donate or volunteer to Ritenour Co-Care Food Pantry, visit its website.