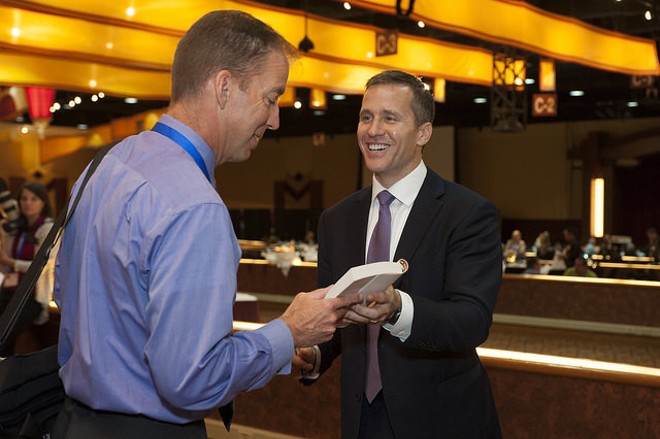 Governor Eric Greitens did not, in fact, speak at the National Urban League's Women of Power luncheon today. He was invited to do so, but spokesman Parker Briden tells us he declined the invitation on July 13.

No word on why the national organization continues to list the governor as a speaker for the awards luncheon — an action that triggered pushback from some pro-choice women.

We regret stating Greitens' attendance as fact in our earlier post. Please see our editor's note below.

Yesterday, Missouri Governor Eric Greitens signed into law harsh new restrictions on abortion, thus pissing off a whole bunch of women who consider reproductive choice to be a civil right.

Today Greitens will be was listed as a key speaker at a women-focused awards luncheon hosted by a national civil rights group.

The National Urban League, which is holding its annual conference in St. Louis this week, has Greitens listed as addressing today's "Women of Power" awards luncheon. Just how much whiplash could that generate for attendees? Well, let's just say the speakers at last year's luncheon included Cecile Richards, president of Planned Parenthood.

For the many female office holders and Democratic Party power players at the luncheon, it won't be only that Greitens signed the bill, which advocates say will effectively stop Planned Parenthood from opening abortion clinics in the state other than the one that's currently in St. Louis. It's surely also that he personally ordered the special session that put it on the table in the first place — a session that costs taxpayers up to $100,000 a week (for the Senate) and $28,000 a week (for the House).

Those aren't the only costs — Alison Dreith of NARAL Pro-Choice Missouri says the new laws are certain to trigger a lawsuit, one she believes the state can't win. "They think that it’ll pass the muster of the courts — it’s not going to at all," she said yesterday.

But any frostiness Greitens feels at lunch today may not come solely from those concerned about wasteful spending. Another speaker listed for the awards luncheon is the Rev. Traci Blackmon, acting executive minister of justice & witness ministries for the United Church of Christ.

Blackmon, who is also senior pastor at Christ the King United Church of Christ in Florissant, is on the record denouncing the governor's special session.


In the video, titled #WhatIsProLifeMissouri, Blackmon joins with other female faith leaders, reading a statement that says, in part, "What it really means to be pro life Missouri is allowing women to have full autonomy and authority in their healthcare decisions."

And lest anyone think the special session took place too recently for the National Urban League to know what Greitens stood for being inviting him, let's just note this: Greitens is also the guy who signed into law S.B. 43, which drew widespread criticism from civil rights leaders for making it much harder to sue for employment-related discrimination or being fired for whistleblowing.

Lunch begins at 12:30 p.m. What we'd give to be a fly on that wall .... or maybe not. The whole thing feels downright uncomfortable.

The original version of this story wrongly stated that Eric Greitens would be speaking at the National Urban League's "Women in Power" awards luncheon. While Greitens was invited to do so — and continues to be listed on the website as a speaker — he declined the invitation. We regret the error.

We have since edited the story to cross out the inaccurate phrasing. We also changed the headline to reflect the reality of the situation.