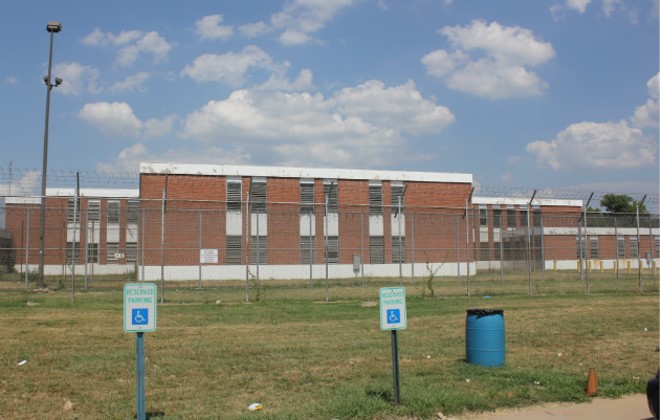 Mayor Lyda Krewson says portable, industrial-size air conditioners will be installed at a St. Louis jail where inmates have been begging for relief from the heat.

The five units, weighing between 25 and 50 tons, should all be online by the end of the week, according to the mayor. They're expected to drop temperatures from more than 100 degrees to 78 at the Medium Security Institution, better known as the workhouse.

City officials have been under pressure to find some kind of solution for the overheated inmates since Tuesday when a video was posted to Facebook showing detainees screaming out of the windows for help.

The video quickly went viral, leading to protests last night outside of the workhouse on Hall Street along the north riverfront. About 150 people, some banging pots and pans, demonstrated at the jail, according to St. Louis Public Radio. Police with riot shields tried to used a chemical agent to disperse protesters, a few of whom lifted up a chain-link fence and crawled under, the station reported.

Krewson said two police officers were injured during the confrontation and urged "our fellow citizens to remain calm."

Heat is only one of the 51-year-old jail's problems, critics say. State Rep. Joshua Peters (D-St. Louis) toured the facility recently and said there was mold in dining areas and an infestation of mice and insects. Peters has called on the House Speaker and director of the state health department to investigate the jail's conditions.

Kennard Williams of Decarcerate St. Louis told the Riverfront Times on Friday that the city has known about the poor conditions at the workhouse for years. He says the only long-term option to keep people safe is to permanently close the facility.

The workhouse is one of two detention centers in the city. Built in 1966, it has a capacity for 1,138 and held 770 in June, according to the most recent monthly report. All but 27 of the people there were awaiting trial, because they hadn't been able to post bail.

A second facility, the City Justice Center, is downtown at 200 South Tucker and can hold 860 people. It held 630 in June.

A trio of organizations — Arch City Defenders, St. Louis Action Council and Decarcerate — have been raising money to bail out detainees. They had reportedly posted bail for fifteen people as of Friday evening.
We welcome tips and feedback. Email the author at doyle.murphy@riverfronttimes.com or follow on Twitter at @DoyleMurphy.