For St. Louis' Homeless, the Heat Is On — But For Now, So Is the Water 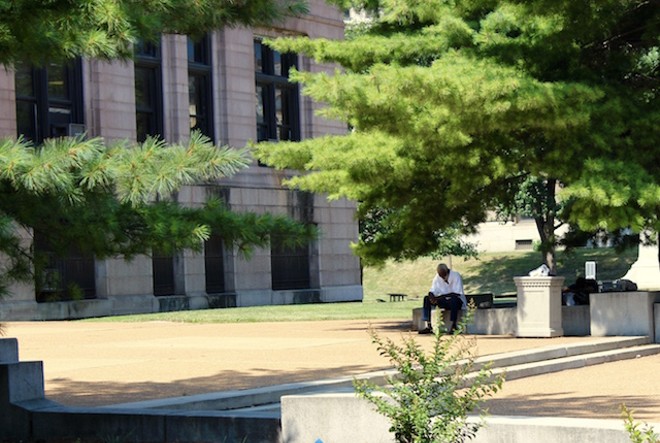 As temperatures reach 101 degrees in St. Louis today, multiple water main breaks have popped up around town. One main break downtown, however, had the potential for more dire consequences than the others.

The St. Patrick Center at the corner of Tucker Blvd and Convention Plaza was one of the many buildings in the downtown area affected by a nearby water main break. The homeless shelter, which provides temporary housing for the homeless and those at risk of becoming homeless, was forced to closed its doors earlier this morning.

St. Patrick's senior director of communications, Kelly Peach, explained earlier today that the building having no water presented a safety issue. Still, she said, all the homeless residents the organization usually serves were "accommodated for" and relocated to places such as Biddle House and Rosati Apartments.

"Everyone seems to be fine, we've had no disasters," Peach says. 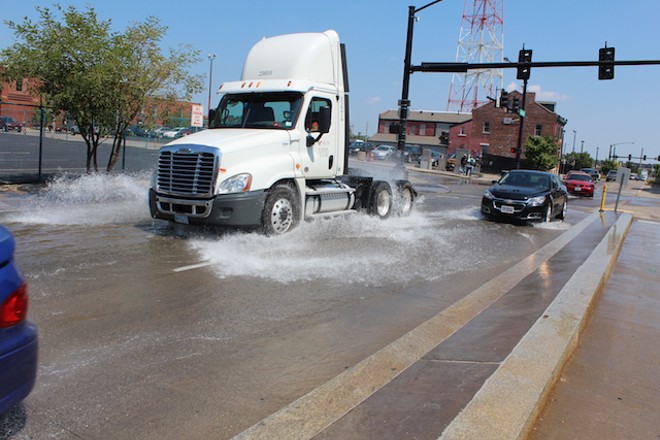 But the Rev. Larry Rice — director of the New Life Evangelical Center at 1411 Locust Street, which the city forced to close in April — does not think everything is fine. Rice held a press conference this morning at St. Louis City Hall, where he met with 125 homeless people and provided them with bus passes to help ensure they find shelter from the extreme heat.

"We try to directly help the people," explains Rice. He described having to help an elderly homeless man who could barely walk because of the extreme blisters on his feet.

Rice does not think the situation is under control. Not surprisingly, he primarily blames City Hall. Its efforts to close Rice's shelter took away one outlet for the homeless population of St. Louis to utilize, he notes.

"The city of St. Louis has spent half a million to keep us closed," Rice says. He claims that the city does not want poor people in the neighborhood and would rather displace them than help them. "The city's war on poverty has become a war on the impoverished."

Rice, who has been threatening a lawsuit to get his shelter reopened, says he could provide a safe place for the city's homeless residents in these times of extreme heat. He says the city of St. Louis has been interfering with his operation for far too long — and that he fears if a change does not come soon he will begin to see the homeless "die one by one."

Still, by lunch time today, at least one problem was taken care of. According to Todd Waelterman, the city's director of operations, the break near 13th and Convention Plaza was fixed around 11:30 a.m. Waelterman said that water should be returning to the area.

And Peach tells Riverfront Times that by early afternoon, the St. Patrick Center was back up and running, fully helping everyone that it typically serves. Peach says the water came on sooner than she expected.

Even with that welcome news, the menacing heat wave continues to affect the homeless population. In the morning, a crowd outside the St. Patrick Center discussed the latest developments — and the punishing temperatures, which could hit 107 tomorrow.

Timaje, a homeless man who uses the St. Patrick Center "off and on" was out in front of the center expressing concern. But even though the weather was blistering, and many might fear for their own lack of shelter, Timaje was primarily concerned with the imposition the water main break was causing on traffic and was concerned for the motorists safety. "There are no signs indicating that the road was backed up with water," he exclaimed.

When asked how the extreme heat affects himself and the other members of the local homeless population, Timaje simply said, "It is what it is. We just take it day by day."