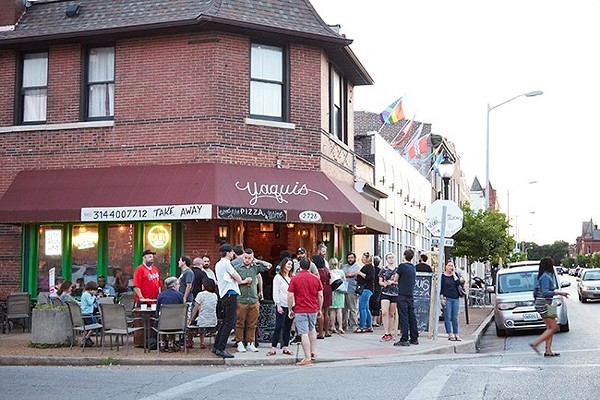 On Monday, July 10, a group of musicians were sitting outside Yaquis (2728 Cherokee Street) around 11:27 p.m. when someone started firing out of a passing SUV. The suspect — described in a police incident report as a white male with a heavy build, ages 35 to 40 — hit three women with a spray of BB guns or pellets, police say. A nearby storefront was also hit.

But it's what happened next that should have given the driver pause: Witnesses allege on social media that someone nearby pulled out a semi-automatic and started shooting right back at the SUV.

(That detail is not contained in the police incident report; ask about it, a police spokeswoman neither confirmed or disputed it.)

But the exchange of gunfire didn't end that night's BB gun drive-bys. Police say they are investigating another incident about an hour later. Around 12:30 a.m., the occupant of a dark-colored SUV, possibly a Suburban, fired several shots from a pellet/BB gun into the glass front door of Sandrina's (5098 Arsenal Street), the neighborhood bar in Southwest Gardens. "Investigators are working to determine if the same suspect(s) is responsible for both incidents," a police spokeswoman told us last week.

Last Saturday, however, someone struck again, this time in Tower Grove South. Staffers at Hartford Coffee Shop (3974 Hartford Street) reported on Facebook that the shop had been hit, with three windows shattered.

Residents of the 4300 block of Potomac reported on social media that at least five cars were hit around the same time.

Last fall, a St. Louis man was charged after police linked him to a slew of shot-out car windows in St. Louis, Clayton, Shrewsbury and Maplewood. Andre Armstrong, then nineteen, faces more than 40 felony counts of first-degree felony tampering with a motor vehicle.