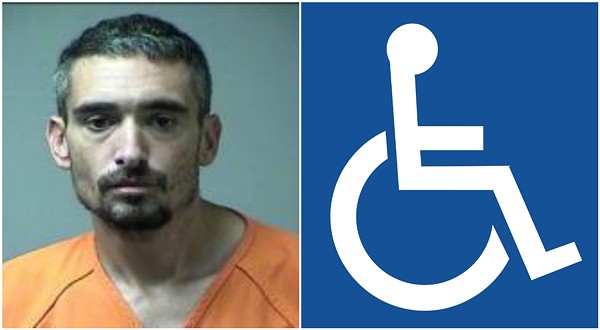 On the list of things you really shouldn't steal, an old man's wheelchair ramp has to be pretty high. But prosecutors say Overland police found three people who were willing to give it a try.

The victim in the case is 88 years old, and his aluminum ramp was outside his home — apparently ripe for the taking.

The thieves spotted it there on June 9 or 10, loaded it into a pickup truck and drove off, according to court documents. The getaway, however, was less than perfect. They had been seen, and it wasn't long before the 88-year-old's grandson was on the phone with police describing the trio's getaway car, a white pickup.

An Overland officer stopped the truck less than three blocks away. The three suspects — identified as Casey Flinn, 35, of Union and Kevin and Pattie Mesenbrink, ages 56 and 49, of St. Ann — admitted they had taken the ramp, police say. (The officer had already noticed the disassembled pieces in the truck bed.) But Flinn and Kevin Mesenbrink claimed they were only responding to a Craigslist ad that supposedly listed it as free.

The victim's grandson said there was no ad, and Pattie Mesenbrink admitted it was just a straight-up theft, authorities say. All three suspects were arrested. They were charged on Tuesday in St. Louis County court with one count each of felony stealing.

The victim's son told police the ramp was worth an estimated $1,500.