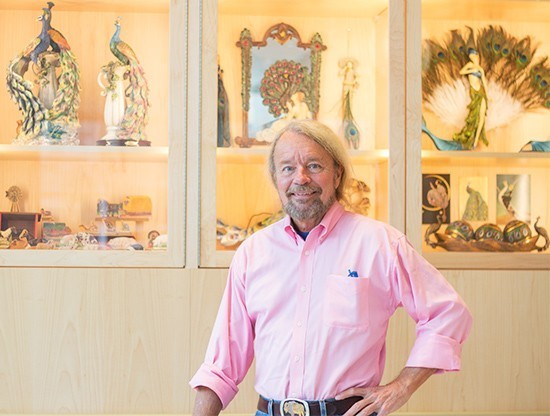 For a little more than a year, Jessica Bueler worked to promote the Loop as the marketing director for its special business district.

But now, Bueler is blasting the district and the man responsible for much of its growth — Joe Edwards.

A developer who owns many buildings on the street, Edwards hasn't so much left his mark on the Delmar Loop as he has branded it with his vision, his restaurants, his concert venues and, at some point in the future, a $52 million trolley line.

He is also the president of the Delmar Loop Special District. And it's in that role that Bueler worked with him — and also alleges that he made her job untenable. Bueler says she was subjected to rambling late-night phone calls, displays of anger and other unprofessional behavior. (Edwards staunchly denies her allegations.)

The owner of HSB Tobacconist, Bueler runs a business in the Loop that leases space from Edwards. She was also being paid $55,000 annually as the non-profit district's marketing director.

On April 25, Bueler was told that her one-year contract wasn't being renewed, says Tom Schmidt, who serves as treasurer for the West Loop Special Business District. Since it was set to expire just five days later, they offered to pay Bueler for two months' more work, Schmidt says, but that was mostly to provide Bueler with a softer landing. Schmidt says revenues had fallen, and the Loop simply couldn't continue to spend 85 percent of its budget on a single part-time position.

But it's what happened six months before, in November, that Bueler believes is the real reason her contract wasn't renewed. She says she told the board about her problems with Edwards — and believes she was targeted as a result. (Edwards confirms that she made the allegations at the time, though he denies they had any substance.)

More recently, after she was told her services were no longer needed, Bueler took her concerns to the regular public meeting of the Loop Special Business District on June 6. The audience included around 40 or 50 people, among them Loop business owners. As president of the special business district, Edwards himself was in attendance. Bueler later aired her concerns further in a July 8 Facebook post, although there she did not use Edwards' name, referring to him only as "the President."

Bueler tells RFT that her Facebook post wasn't intended as vengeance over losing her job. It had been a long time coming, she says.

"I felt I was trapped in this spot where my boss was intoxicated from the moment he came to work," contends Bueler. She claims she was put in an impossible position.

"He is my landlord, and this is incredibly scary to come out and tell the truth of what is going on. I was hoping we could get him treatment or get him help. Instead I got fired."

"I don't know what she's trying to do; it's appalling. The claims are totally unfounded," says Edwards, adding, "Frankly they're slanderous and potentially libelous." (Full disclosure: Edwards is also the RFT's landlord, although the paper plans to move next month.)

Schmidt, owner of BBQ staple Salt + Smoke, which sits across the street from Edwards' flagship restaurant Blueberry Hill, also defends Edwards. He acknowledges that Edwards has a penchant for late-night phone calls, but says the developer does not have a problem with alcohol.

Beyond that, he says the board took steps to address Bueler's concerns after she voiced them in November. Edwards — who famously does not use email — even agreed to use a special email account for the district's business to eliminate the need for late-night calls.

After that, Schmidt says, the board fully believed the problem had been solved. That's why they were so shocked to hear Bueler try to connect the termination of her contract to her six-month-old complaints.

"It was extremely bizarre behavior on her part," recalls Schmidt of the June 6 meeting. "I think everyone thought it was extremely strange at that time. I think it was an outburst as a result of her feeling she was wronged by the marketing contract work coming to an end."

Edwards too says that "everything was fine" after the November meeting.

Despite what Schmidt and other board members apparently believed, Bueler claims that her relationship with Edwards only became more fraught after that.

"After that meeting Joe's behavior towards me changed immensely. He hardly spoke to me and would not respond to any emails that I sent him," she alleges in an email to the RFT. "However, nothing was done from the board to help improve the work environment." In her view, the fact that board members had risen to Edwards' defense in November only reinforced his status as untouchable.

Bueler says her silence after the November meeting wasn't acquiescence, but fear. "I was afraid if I was too vocal about what was happening to me that I would lose my job," she says.

Of her termination in April, Bueler says, "It seems highly convenient."

Schmidt, who sits on the finance committee that recommended Bueler's contract not be renewed, says the decision came down to the budget, nothing more. Revenue is down, particularly on the western end of the Loop, and the district simply doesn't have have the resources to maintain a full-time marketing director.

"There's no basis for this, no proof to this," Schmidt says Bueler's claims about retaliation. "In no way was she wronged."

As for Bueler, she's weighing her options, which she says could include a lawsuit. She declined to provide evidence that she says will back up her claims.

"I need to talk to an attorney," she says. "If I do use some of these items in court, I don't know that they should be released now."

Both Schmidt and Edwards say the board could also take action against Bueler, saying her claims about Edwards are libelous.