Missouri Secretary of State Says Trump Can Have Voter Lists, But No SSNs 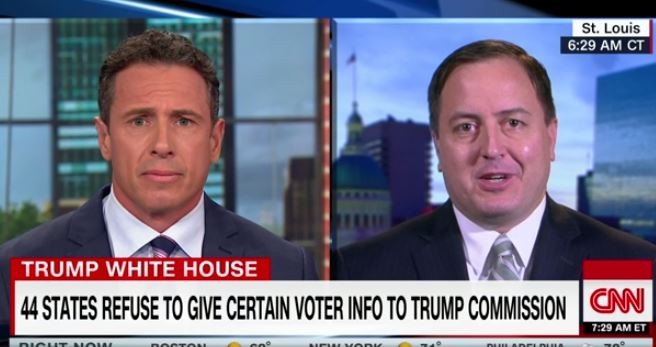 Jay Ashcroft must be loving this.

Ashcroft, Missouri's new secretary of state, campaigned hard on a platform of fighting voter fraud and continues to publicly defend the state's voter ID law — and now, despite little evidence indicating that voter fraud is actually a serious problem, the president of the United States has joined the grandstanding by creating a "Commission on Election Integrity."

Under Ashcroft's direction, Missouri stands as just one of three states that have publicly commended the commission's snooping for public voter data, according to a CNN survey. Other secretaries of state have blasted the federal effort, in some cases with grandiose verbiage. Mississippi told the commission it could jump in the Gulf of Mexico, and Kentucky's secretary of state quipped, awesomely, "There's not enough bourbon here in Kentucky to make this request seem sensible."

But to Ashcroft, the request is more than sensible: The law actually requires that he comply. And not because it's Trump asking, either.

"We are simply following the law, which compels us to provide information to organizations who request it," says Ashcroft spokeswoman Maura Browning. She stresses that, in accordance with Missouri law, social security numbers and voting history will not be included in the data Missouri will provide the commission.

And yes, that means Missouri isn't actually giving the commission every last thing it wants. In a June 28 letter, the commission, which is chaired by Kansas Secretary of State Kris Kobach, had requested "publicly available" voter info, but that came with a slew of other asks.

Here's how Kobach phrased the request in the letter:


Browning tells RFT that Missouri doesn't actually collect social security numbers with voter roll information, and she says the same goes for individual voter history. (Ironically, in his capacity as Kansas' secretary of state, Kobach isn't complying with the full demands in his own dang letter either.)

"What we're doing is considering the letter an open records request, so we don't have any leeway on whether or not we provide the information," Browning says. "We can't pick and choose which laws we follow; we have to follow all of them."

On Wednesday morning, Ashcroft made a similar argument during an interview with CNN's Chris Cuomo, but their discussion quickly veered from the particulars of the commission's letter to the broader debate about whether voter fraud poses a legitimate danger to free elections — or if this entire effort exists only to comfort a very crabby and insecure president who can't stand that he lost the popular vote to Hillary Clinton by 3 million ballots.

Ashcroft tried to reference examples of illegal voting in Missouri, but Cuomo correctly noted that only one of those cases involved voter impersonation. Ashcroft couldn't reference more than a few isolated cases where voter fraud made an actual difference in an election.

The lack of data supporting the need for an investigation puts Ashcroft in a familiar position — he's brushed off similar complaints while advocating for the state's voter ID law — but in this scenario he has the state's open record law to fall back on. In fact, in a July 2 blog post on his campaign website, Ashcroft noted that his predecessor, Jason Kander, provided the same set of public voter data nearly 400 times.

And Kander? He's no fan of the commission on election integrity, and he's not keeping quiet about it.

Over 40 states are refusing to give the bogus Trump commission what it wants. For context, our country is made up of 50 states. https://t.co/xuoF5BHcGp

Kander did not respond to our requests for follow-up comment about his handling of such requests.

Trump, as can be expected, has reacted to this whole thing very maturely and with tremendous integrity and grace.

Numerous states are refusing to give information to the very distinguished VOTER FRAUD PANEL. What are they trying to hide?