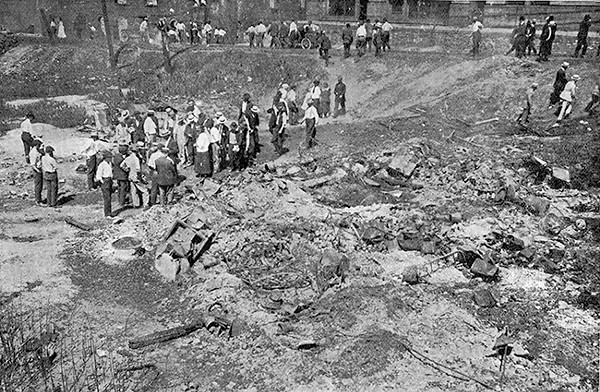 Months after the smoke cleared from East St. Louis, a congressional committee interviewed dozens of witnesses who testified to the acts of violence meted out by white mobs on black residents from July 2 to 3, 1917.

The witnesses included survivors who had fled to St. Louis, as well as East St. Louis police officers, militiamen, politicians and reporters. By the end of the investigation, their words filled thousands of pages.

This weekend, those words will populate tweets.

Organized by historian Andrew Wanko of the Missouri History Museum, the tweets will use facts from the congressional testimony to trace the events of the riots, starting in real time the evening of July 1 and concluding around midday July 3. The museum plans a total of 150 tweets.

In a blog post on the museum's website, Wanko explained that the extensive congressional records allowed researchers to compile a detailed timeline of the atrocities committed against blacks in East St. Louis.

"These tweets will allow you to experience the riot’s happenings via the words and perspectives of people who saw them unfold, exploring this tragic piece of regional history in a uniquely 21st century way," Wanko writes.

The "live-tweet" will begin at 4 p.m. Saturday, July 1, and can be followed with the hashtag #ESTLRiot100. Follow @mohistorymuseum to see the tweets pop up on your timeline.

For more background on the East St. Louis race riot of 1917, check out this week's RFT cover story and also our collection of primary historical documents.