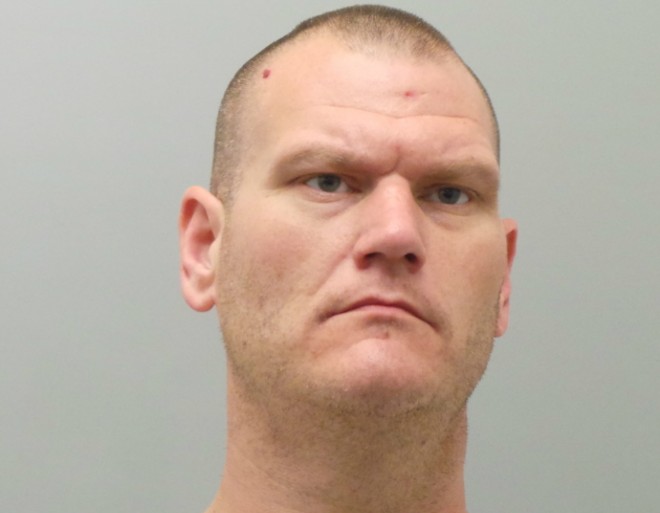 An escaped inmate who was captured after four days on the run is facing a new charge.

Bruce Brutsman Jr., a 36-year-old south county man who looks a little like the bald bailiff Bull Shannon from Night Court, was charged this morning with a felony count of escape.

Brutsman was originally arrested on charges of burglary and stealing a motor vehicle. But last Friday, the six-foot six-inch, 240-pound suspect swallowed two batteries from a TV remote at the county Justice Center, according to court documents. He was then taken to St. Mary's Hospital, where he was to receive treatment under guard.

Brutsman apparently had other plans. After a night in the hospital, authorities say, he asked to use the bathroom. The corrections officer stationed outside the door heard a loud crash and entered to find Brutsman holding the electrical panel from the ceiling over his head, authorities say.

The guard took the panel, but Brutsman was able to power past him and bolt out of the hospital.  Surveillance cameras recorded him as he ran, but soon lost sight of him. Investigators were able to track the big man's route to Hampton Avenue, where they believe he stole a 1997 Toyota Tercel and took off.

Nearly four days passed before police found the abandoned Toyota on Wednesday morning in the 1100 block of Salisbury Street, on the edge of the Hyde Park and Near North Waterfront neighborhoods in north city.

St. Louis County police arrested Brustman just hours later, at noon on Wednesday, about 40 miles south in Festus. It wasn't clear how he got there, but he's back behind bars now.