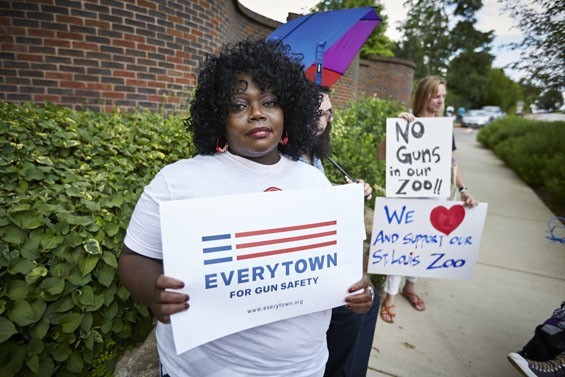 In the summer of 2015, a Cincinnati gun rights activist named Jeffry Smith set out to defy the signs proclaiming "No Firearms" at the St. Louis Zoo. One temporary restraining order later, he walked through the zoo's front gates on June 13 wearing an empty holster and vowing to continue the fight in court.

On Friday, a little more than two years since that day, St. Louis Circuit Judge Joan Moriarty issued a final ruling in favor of the zoo, upgrading the temporary ban against Smith and "anyone acting in concert or participation with him" to a permanent one. Smith can still visit the zoo — but he can't do it while packing heat.

But what makes the ruling more interesting is that it deals a legal blow to the 2014 ballot initiative known as Amendment 5. Passed by a popular vote, the initiative amended the Missouri constitution to expand gun rights in the state, adding a high legal standard — "strict scrutiny" — for implementing limits. The new amendment declared that the "unalienable" right for Missourians to bear arms "shall not be questioned."

As detailed in a 2015 RFT cover story, Smith had hoped to demonstrate just how far Amendment 5's new protections could go — and his tactic would be to challenge the right of the St. Louis Zoo, a public entity, to ban legally armed people from entering the park.

Granted, there was reason to believe that Amendment 5 had some muscle. At the time, a city judge had already cited the sweeping language in the new constitutional amendment to justify allowing felons with non-violent offenses to possess firearms. (Later, in 2016, the city judge's ruling was struck down by the Missouri Supreme Court.)

In Judge Moriarty's latest ruling, she states that the zoo "falls squarely into at least two lawful exceptions" granted to the state's open carry laws — educational facilities and amusement parks.

"The zoo is a family attraction where the presence of guns would be irregular and dangerous," Moriarty writes. "The court finds that the zoo's policy prohibiting visitors from carrying guns on the zoo's campus is narrowly tailored to support a reasonable government purpose, and therefore, would survive a 'strict scrutiny' challenge under well settled legal precedents."

Smith's lawyer, Jane Hogan, disputes the zoo's designation as an "amusement park" — a term that is not precisely defined in the statute — and maintains that the judge was wrong to issue the restraining order in the first place.

"I really think that she has used the term of the statute in the broadest possible sense in order to come up with the decision that she did," Hogan says.

Reached by phone Monday afternoon, Smith declined to comment on the judge's Friday ruling, though he did take the opportunity to express frustration at the lack of support from Amendment 5's original legislative sponsor, former state Senator Kurt Schaefer (R-Columbia). "Schaefer is a typical politician," Smith says.

Smith says he plans to appeal his case to a higher court.