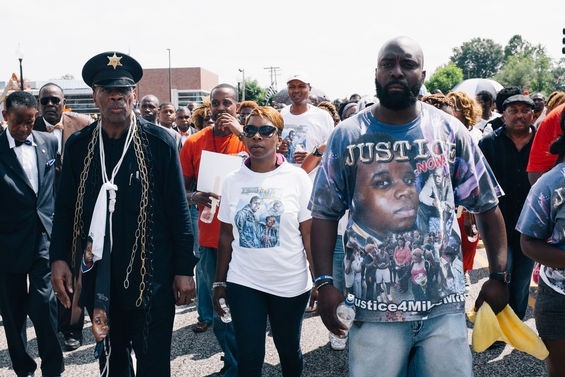 The terms of the settlement were initially sealed per a judge's order issued earlier this week. However, a report this morning from the St. Louis Post-Dispatch — citing Ferguson city attorney Apollo Carey — revealed the settlement's dollar amount, which apparently will be paid by the city's insurance company "on behalf of multiple defendants."

In an order approving the settlement issued June 20, U.S. District Judge E. Richard Webber wrote that the amount is a "fair and reasonable compensation for this wrongful death claim." The money will be split between Brown's mother, Lezley McSpadden, and father, Michael Brown Sr.

Filed in April 2015, the wrongful death lawsuit advanced the argument that it was Wilson, not the eighteen-year-old Brown, who instigated the physical altercation on August 9, 2014, that ended with the officer shooting the teenager in the street. The lawsuit also argued that Brown's death was an example of widespread discrimination and "unconstitutional" treatment of African Americans in Ferguson.

However, a St. Louis County grand jury ultimately declined to bring charges against Wilson. Although a later federal investigation by the Department of Justice revealed shocking examples of police abuses in Ferguson, the federal agency's analysis of witnesses statements and forensic clues similarly concluded that the evidence did not support charging Wilson with a crime.