Civil War Museum to Krewson: See You in Court 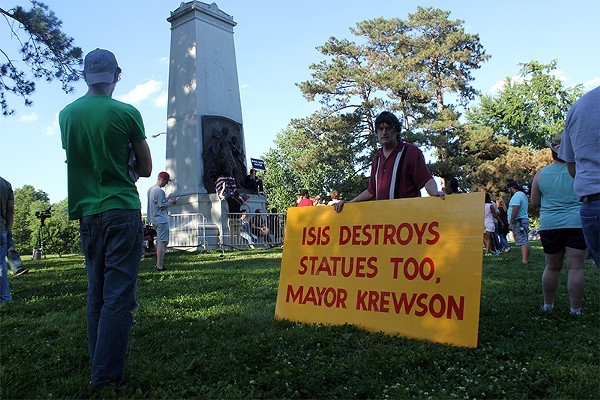 Update on Monday, June 19: The city of St. Louis and the Missouri Civil War Museum will indeed see each other in court. On Friday, the museum made good on its threat and filed a lawsuit against the city, seeking a "judicial declaration regarding the lawful ownership of the Confederate Memorial monument."

Today, St. Louis Circuit Court Judge Robert Dierker ordered the city to halt its efforts to remove the monument until the ownership can be hashed out in court. A trial is now scheduled for July 6.

End of update. The original story continues below:

The Missouri Civil War Museum and the city of St. Louis agree that the Confederate monument in Forest Park has to go, ASAP. The only problem is, they both believe they own the thing, and therefore that they should control the process and its ultimate end location.

The city isn't backing down — in fact, its workers have already removed the monument's top as a test-run for the full de-installation, which is expected to take place in a matter of weeks. But the museum, based in Jefferson Barracks, doesn't appear ready to budge either.

In a letter sent today to Mayor Lyda Krewson, Museum Director Mark Trout offered an ultimatum: Either acknowledge the museum's ownership of the monument or face a lawsuit.

"Our objective is the same as yours and that is to immediately remove this historic monument from your park property and remove it permanently from the city limits of St. Louis," Trout writes. He added that, after removing the monument, the museum would "guarantee" that it would never be re-installed in St. Louis or St. Louis County.

The museum's claim of ownership stems from a 1912 city ordinance. The ordinance allegedly included language stating that the United Daughters of the Confederacy, which funded the monument, were responsible for its maintenance. That, the museum claims, means they continued to retain ownership even though the monument was in a city park. And, according to today's letter, the group "gifted" the monument to the museum on Tuesday.

Trout's letter concludes with a not-so-veiled threat of a lawsuit. Trout writes:

"If you decide to challenge our ownership of this monument that will of course have to result in immediate legal action being taken to prove our ownership. This will be obviously stop the removal of the monument by both of us from Forest Park and will only delay our same shared objected in removing the monument from the park and from the city limits."

"It is our position that the city controls the monument," Krewson spokesman Koran Addo said in a statement to Riverfront Times.

However, Addo doesn't rule out the possibility of the monument finding its way to the museum — just as long as it's on the city's terms.

"The plan is to remove the monument and place it in city storage," writes Addo. "At some point, the city will consider proposals from parties interested in taking ownership or displaying the monument. The Civil War Museum is welcome to submit a proposal at that time."

See you in court?