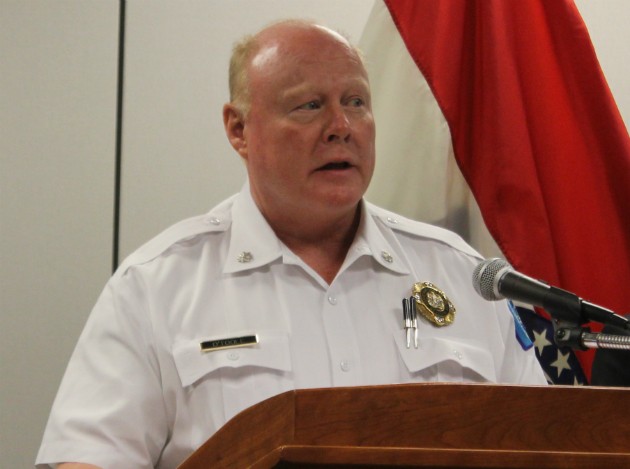 St. Louis' acting police chief doesn't like it when you mess with his friends, two city cops have alleged in complaints filed with the department.

The officers, who are members of the the police auto theft unit, claim that Lt. Colonel Lawrence O'Toole ordered them to cut corners to help his buddy — and then berated them when they refused. And while the complaints were ultimately resolved in mediation, they have led to promises of new protocols to prevent political meddling in the unit.

The incident began in December, at a time when O'Toole was assistant chief. He took over the department on an interim basis in April when Chief Sam Dotson abruptly retired.

At the time, O'Toole's friend, who sells used trucking trailers, was trying to renew a motor vehicle dealer's license. He needed police to sign off on an inspection. When the officers told O'Toole there were some issues with the business that prevented them from doing so, he flipped out, according to the officers' complaints.

"Don't give me that shit," he reportedly told one on the phone while the other listened. "I don't want to fucking hear it."

The fiery exchange was described in internal memos filed by the officers in January and later obtained by the Riverfront Times.

At issue was the protocol for the state-mandated inspection, which is handled by local police departments. One of the co-owners of D&B Trailers, Michael Bono, wanted to set up an appointment, but the St. Louis officers refused. They told him they don't allow prearranged appointments, because the inspections are unannounced.

That was a problem, because Bono was rarely at the office. "I'm on the road most of the time selling," he tells the RFT.

State law requires dealers to be open on site for at least twenty hours spread out over at least four days a week. Business hours are to be posted in plain view.

But one of the officers stopped by twice in January and was told by the building manager on each occasion that D&B had moved out months before, according to the complaints.

Bono says there was some confusion about that. The building at 4550 Gustine Avenue is a sprawling industrial complex, and he says his business had moved from the south end to a central office to accommodate some renovations.

He says the seventeen-year-old trailer business had been in the building since 2009 and never had any problems setting up appointments until December, after the unit switched the officers handling inspections. Now, the officers insisted on random inspections. Bono acknowledges that he was annoyed and called his old friend O'Toole.

"I wasn't calling him to ask for a favor," Bono insists. "It was more or less to give him shit since I know him."

That may be, but the officers say O'Toole took it as a sign they weren't willing to accommodate his friend. He reportedly told them that Bono, whom he'd known for 40 years, was threatening to move his business out of the city.

"Why is this so goddamn hard?" O'Toole said, according to one of the officers. He allegedly added, "Is this your view of the city? Is it your view to see dilapidated buildings in the city of St. Louis?"

Again, the officer alleges in his complaint, he resisted: "I told the colonel that it was not my plan or idea to see businesses leave the city, but if the businesses were operating with no prudence of the rule book set up by Missouri Department of Revenue then what will be will be."

That went over poorly with O'Toole, the officer wrote.

"You have got to be fucking kidding me," O'Toole replied, according to the officer. "This is not how this is fucking going to work. You are to call this businessman and set up and appointment with him to inspect his business."

The officer reported the interaction to another superior. Then he headed back to Gustine with the second officer.

This time, when the officers arrived, the building manager said he may have been mistaken about D&B moving out. He led the officers to an office on the opposite side of the building. The officers noted a working phone, but there were no posted hours as required, and licenses hanging on the wall were out of date. The bigger problem was that again, no one from D&B was there.

One of the officers called Bono and told him they were leaving and would turn over the matter to their bosses. Less than two hours later, O'Toole called one of the officers, according to the complaint.

"Who made the phone call to my friend?" O'Toole reportedly said. When the officer confirmed it had been him, the lieutenant colonel's reply was brief. "That's all I needed to know!"

Apparently worried about angering the second-most powerful man in the department, each officer filed a memo with a lieutenant, describing in detail the efforts to inspect the business and O'Toole's response.

The RFT sent a list of questions about the memos to a police spokeswoman. We wanted to know if O'Toole disputed the officers' accounts and whether the acting chief had a history of intervening on behalf of his friends. We also asked if it was true, as we had heard, that the department was working on a standing order to prevent meddling in the work of the auto theft unit.

In response, police sent a brief statement: "The issue referenced in your inquiry was resolved through successful mediation. The Special Order as it relates to motor vehicle dealer inspections is in the process of being revised."

The RFT also reached out to the officers through their union, the Ethical Society of Police, which represents black officers. Attorney Rufus Tate, Jr. says the union did negotiate an agreement with O'Toole to rewrite police procedures to insulate the auto theft unit from favor-seeking superiors.

Tate declined to talk about the incident in detail, but he says that police department leadership has often leaned on the rank-and-file to carry out pet projects.

"It's a custom that's been going on for decades," he says, adding that it puts junior officers in a terrible spot — they can either anger their bosses or bend the rules, putting themselves in potential jeopardy.

As for Bono, he says he was frustrated by the experience, and he let O'Toole know.

"Larry, this is what I'm doing — I'm shutting down," Bono recalls saying. "I'm moving to another state."

He says an inspector from the state eventually told him he could solve his problem by listing his hours as "by appointment only," but by that time he and his partner had already made up their minds to leave. They moved their headquarters across the river to East St. Louis earlier this year.

Bono says he'll let the officers and O'Toole sort out their differences. He doesn't want to be in the middle anymore.