A Belleville man who campaigned for Bernie Sanders has been identified as the gunman who opened fire on a group of Republican congressman near Washington, D.C., this morning.

A security detail of Capitol Hill police assigned to Scalise exchanged fire with the gunman, who was then taken into custody. (Update: At 10:37 a.m., President Trump announced that the assailant had died from his injuries.)

Law enforcement sources have told the Washington Post and other media outlets that the shooter was James T. Hodgkinson, 66. Hodgkinson, who lives in Belleville, Illinois, was described to the newspaper by one Facebook friend as a "passionate progressive" who "showed no signs of violence or malice."

The friend said Hodgkinson was a union tradesman who'd canvassed for Sanders in Iowa. On his Facebook page, Hodgkinson indicated that he owned a home inspection business. He also posted many links decrying President Donald Trump, but also Hillary Clinton, whom he derided as "Republican lite." Neither profile photo was of his face. The main photo showed an American flag, with the phrase "Democratic Socialism explained in three words: We the People." The background photo was of Sanders. 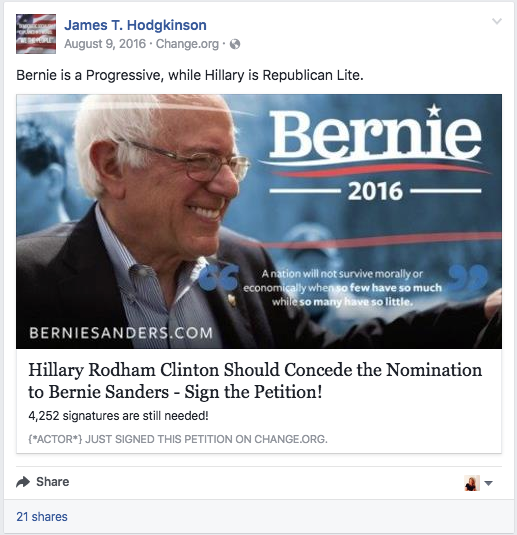 Hodgkinson's wife apparently told ABC News this morning that he's been living in Alexandria — the site of the attack — for the past two months.

As the Belleville News Democrat has since reported, Hodgkinson wrote several letters to the editor. He seemed mostly interested in income inequality, though he also once advocated for legalizing marijuana. He praised The Rachel Maddow Show, Robert Reich's Aftershock and President Barack Obama.

Hodgkinson also was briefly interviewed by Fox-2 (KTVI) in 2011, during the time of the Occupy protests. He spoke of the 99 percent "getting pushed around, and the one percent ... just not giving a damn."

Hodgkinson's former lawyer, Lyndon Evanko of Belleville, tells the L.A. Times that Hodgkinson was an unhappy man. “He was a bit of a misanthrope,” Evanko tells the paper. “He came across as a very irascible, angry little man, but not somebody I would expect to do something like this."

Shannon Russell, a member of the Belleville chapter of the anti-Trump Indivisible, posted a statement this morning on the group's Facebook page saying that Hodgkinson had not been a member.

Russell also issued a statement on behalf of the group condemning the attack:


The Indivisible 12th of Illinois does not, and will not, condone any kind of violence, including jokes about assassinating the President or any representatives. No matter how much we oppose Donald Trump's agenda, we will never support or promote rhetoric that inflames the hatred of those who are on the brink of violent action. We are disgusted with the despicable act of this coward. Regardless of how angry this administration or our representatives make us feel, there is ZERO tolerance for hate in our groups. We support respectful dissent, but never this or anything intended to intimidate or harm anyone.

Our thoughts are with the victims and their families, and we hope that we can all strive for a level of engagement that is respectful and peaceful, regardless of the issues.

Editor's note: We updated this post at 10:38 a.m. to reflect President Trump's assertion that the gunman has died from his injuries. We'll continue to update this post as news continues to break.