Taxi Commission Has Been Billing Carriage Companies, Even After Halting Regulation 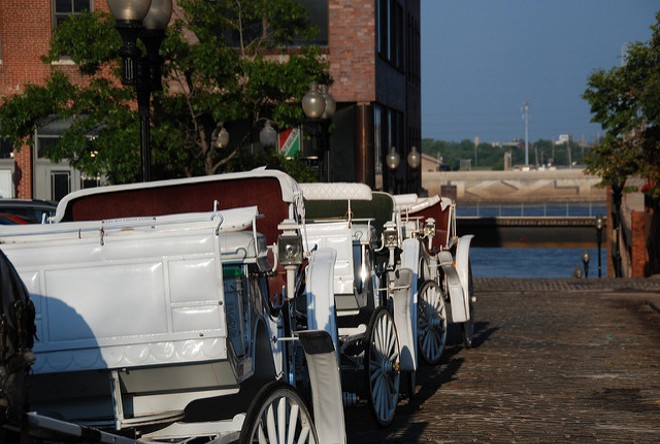 Last week, the RFT revealed that the area's Metropolitan Taxicab Commission, or MTC, quietly pulled back from regulating horse carriage companies in the city and county more than six months ago — saying a judge's order bars them from enforcement.

But no one was more surprised by our scoop than the carriage companies. They say the taxi commission has continued to press them for fees related to inspections and licenses. They had no idea, they say, that there was any reason to question MTC's authority.

"We’ve been following their rules," says Teddy Randazzo, a manager at American Queen Carriage Company. Receipts shared with Riverfront Times show that his company paid more than $1,000 to MTC in April alone for inspections on five carriages, plus a yearly renewal for an MTC license. More recently, the company received a reminder from the commission, dated May 29, to renew an additional driver's license.

Randazzo and American Queen Carriage Company weren't the only ones blindsided by the (very late) breaking news that the MTC had stopped enforcing its street-code regulations on horse carriages. Members of the St. Louis Board of Aldermen say they too had no idea the situation had shifted. At least two aldermen have now called for city action that would fill the regulatory gap.

The regulatory pullback stems from an October 31, 2016, ruling by St. Louis County Circuit Judge Kristine Kerr. One month before, the MTC had attempted to issue a cease-and-desist order against Brookdale Farms, barring the company from operating horse carriages in the city and county. In response, Brookdale Farms sued, arguing that the MTC had no authority over carriage companies. In a terse ruling, Judge Kerr issued a stay, suggesting that Brookdale Farms was correct.

The taxi commission had been down this road before. Created in 2002 by the Missouri legislature, the MTC's regulatory powers are written into state law. But the limited scope granted to the taxi commission has created problems when it tries to regulate industries not specifically covered in its original mandate. Past attempts to regulate pedicabs and shuttles have also resulted with lawsuits — and MTC in the loser's corner.

And that's what happened, again, in October. Judge Kerr's ruling strongly implied that MTC's authority extends only to vehicles-for-hire that carry a taximeter. With MTC's ability to enforce its rules against carriage companies called into question, the commission stopped doing so completely.

Or at least, that's what the MTC and its legal counsel told reporters and an animal rights lawyer. No one, apparently, told the carriage companies. And so, until last week, Randazzo claims, the American Queen Carriage Company was operating under the assumption that nothing had changed. MTC simply gave them no reason to think differently.

"We didn't have knowledge of us being unregulated," Randazzo says. "Now we find out that they weren't in control of us."

It's the same story with St. Louis Carriage Company. Jenny Holzum, the company's business manager, says its drivers and sixteen carriages abide by MTCs rules for licensing and inspections. She's only recently learned that those rules have been unenforceable for months.

"They've never told us that they weren't regulating us," says Holzum, who oftentimes works as a carriage driver herself. She says the regulations don't bother her, as long as they keep horses, drivers and pedestrians safe. The MTC's recent actions, though, have raised new questions about what the licenses and inspections have actually accomplished.

"We've had MTC come and check licenses in the last couple of months, and we still send drivers to the MTC to get licenses and follow all the rules," she says. "I don't mind when you're regulating and protecting. But if you're not regulating or protecting, you're just collecting money."

In response to questions from RFT, the MTC's legal council, Chuck Billings, wrote that Judge Kerr "only stayed the MTC's enforcement of our 'cease and desist' order to Horse Carriages," suggesting that other portions of the same set of laws, including rules for licensing and inspections, remain untouched.

Billings, through a spokesman, did not respond to additional questions seeking clarification, leaving it unclear how MTC draws a line between which regulations it can no longer enforce and those regulations it can still take money for.

Things are much simpler for Brookdale Farms.

"We were told by a judge that the MTC has no legal authority over the carriages," says company owner Jerry Kirk. He hasn't paid a dime to the MTC since Judge Kerr's October ruling. (A hearing on Kirk's lawsuit is scheduled for Thursday.)

It's worth noting that amid the current legal ambiguities, the city's health department has continued hold up its side of a 2015 agreement it signed with the MTC. The agreement, which was created following a lawsuit brought by an animal rights group, made the city responsible for checking on the health and welfare of the horses and stables, even while the taxi commission was responsible for keeping carriages off the streets during rush hour and ensuring drivers were licensed and cleaning up after their horses.

According to about a year's worth of patrol logs received through a Sunshine Request, city staffers made more than 200 inspections during the morning and evening rush hours between June 22, 2016 and June 01, 2017. Not a single violation was reported.

See also: How MTC Fails to Get Bad Taxi Drivers Off the Road