Juan Thompson Pleads Guilty Over Campaign of Terror Against Ex-Girlfriend 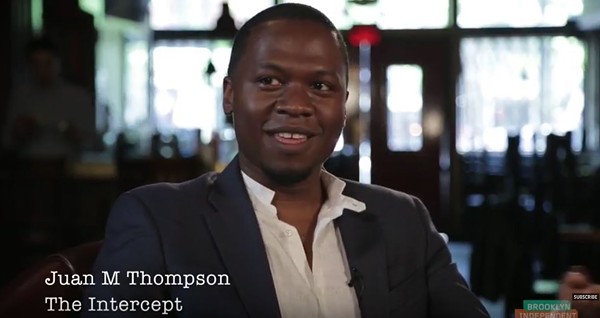 The crazed ex-journalist admitted in court that he launched a string of bomb hoaxes at Jewish community centers as part of vicious campaign of revenge against his ex-girlfriend before being arrested in March.

Thompson had been the subject of a Riverfront Times cover story in February 2016 that detailed the pattern of lies that led to his firing from the Intercept online news site. (Full disclosure: I believe he also targeted me for harassment as a result of the story.)

The 32-year-old's attacks on his ex-girlfriend were twisted and obsessive. The day after she ended their relationship in July 2016, he emailed her boss in New York with allegations that she had been stopped for drunk driving and sued for spreading sexually transmitted diseases, according the FBI. In the email, he pretended he was a national TV news producer.

The FBI refers to that message as the "Hoax News Email" in court documents. But it was only the beginning.

New York City-based attorney Carrie Goldberg, who is representing the woman, says Thompson "terrorized" her client during a long-running pattern of abuse.

Thompson sent the woman emails from anonymous accounts with nude pictures of her and threatened to release them publicly, the FBI says. She also began receiving texts from people who were supposedly Thompson's friends and relatives, telling her that he had been hacked, that he was sorry and even that he had been shot and was near death.

In October, he allegedly settled on a new scheme: He would try to frame her. He first directed the lies toward her employer. He emailed the organization where the woman worked as a social worker and claimed that she had threatened to kill him.

He followed up with faxed claims that she was an anti-Semite, and then more emails alleging she had a sexually transmitted disease. She had taken out a restraining order against Thompson, but it did nothing to stop him.

It was all part of Thompson's campaign to make the woman's life absolutely miserable, authorities and the woman's attorney say. He persisted despite renewed orders of protection, despite a visit from St. Louis police and even despite a call from New York City police, in which a detective told him to stop.

Instead of backing off, Thompson began making bomb threats in January and February. He called or emailed eight of them, with targets ranging from the Anti-Defamation League and Jewish History Museum in Manhattan all the way across the country to a Jewish community center in San Diego. He passed along bogus info about a bomb at a Jewish community center in Dallas and warned that a "Jewish newtown" was coming for a Jewish school in Michigan.

Finally, on March 3, he was arrested by FBI agents and city police in north St. Louis. A relative told the Riverfront Times that day that Thompson was taken into custody at his grandmother's home.

"Thompson’s threats not only inflicted emotional distress on his victim, but also harmed Jewish communities around the country," acting U.S. Attorney for the Southern District of New York Joon Kim said in a statement. "Thanks to the dedicated work of the FBI and NYPD, Thompson will now be held to account for his crimes."

"We give tremendous credit to the team that investigated and prosecuted this case and expect it to be a lesson about the patterns escalation we so often see at our firm among the victims of stalking who we represent," Goldberg said in an email to the Riverfront Times. "At this point, we hope the media respects our client's privacy at home and work since it was her privacy that was so under attack by this man."

Thompson will be sentenced for his crimes in New York on September 15.

Editor's note: This story was altered after publication to include additional details and comments.