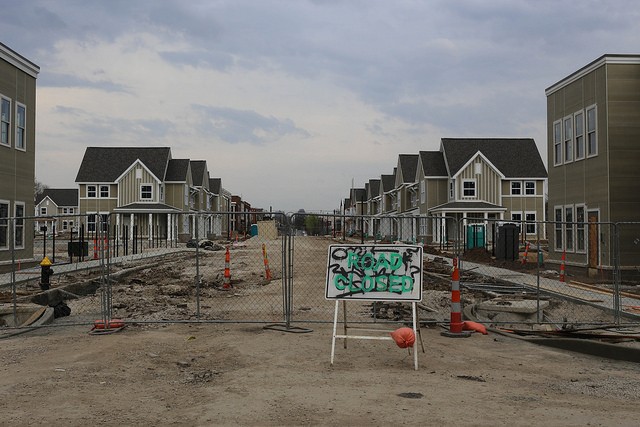 A bill introduced at the St. Louis Board of Aldermen yesterday would require developers to confer with community groups — and enter into legally binding "community benefit agreements" to improve the neighborhoods they're working in.

Under Board Bill 61, the agreements would be required on all developments of $3 million or more. It would also create a "community benefit fund" by adding a one percent tax on the notes issued for tax increment financing, or TIFs — and cap such financing plans to forgive taxes at no more than 75 percent of a project's cost in a broad swath of the city.

The bill is being sponsored by Alderwoman Megan Ellyia Green, who represents the 15th ward in south city. Co-sponsors are Sharon Tyus, Frank Williamson and Dan Guenther.

Community benefit agreements began in Los Angeles, and have rapidly spread to cities throughout the U.S. The idea is that developers seeking to build in a community must come to the table and negotiate with its members — promising to pay living wages to local hires, for example, or set aside money for local parks or include affordable housing.

From their West Coast origins, Community Benefit Agreements have become buzzworthy in progressive circles across the nation, to the point that Green's Board Bill 61 isn't even the only bill introduced at the Board of Aldermen this year hoping to make them happen in St. Louis. Earlier this year, Aldermanic President Lewis Reed introduced a bill to require such agreements in any development receiving tax increment financing.

But Green notes that Reed's plan wouldn't create agreements in the true, "community"-oriented sense of the phrase. He'd require simply that developers present a plan offering such incentives, not that neighborhood stakeholders would be involved in negotiating them.

Reed's bill establishes the Board of Aldermen as the enforcement arm for such agreements. Green's bill handles it differently.

In an email to the RFT, she explains,

Upon notice of a development project, a third party chosen by a RFP process will be the "facilitator" of the process and will call together neighborhood leaders, nonprofits, churches... who will help negotiate the CBA. Because it is a community-led process, and the community groups/people/organizations will be the ones entering into the agreement with the developer, that also gives them the enforcement power.

In other words, if the developer doesn't follow through with the negotiated agreement, the groups who sign can sue. This is very important since the City very rarely exercises claw backs.


Green believes she's proposing a better facilitation system, one with real teeth and funding to see it through: A Community Benefits Fund would be created through a one percent fee on TIFs, the tax abatements offered to many St. Louis developments. That could raise as much as $2 million a year under current TIF levels, she notes.

But what might be most controversial in Green's proposal is the limits that it puts on those very abatements. In any census tracts deemed "low poverty," she would cap abatements at 75 percent. The remaining 25 percent would pay into the fund she seeks to establish.

That would affect a broad area of the city — and some of the neighborhoods in St. Louis that are currently most likely to see TIF funding. Most of south city would fall under her cap. (See the map below — any tract in green would fall under the cap.)

“For far too long, efforts to develop St. Louis have been implemented at the expense of the local community. Our city has made a habit of funneling taxpayer dollars to wealthy developers for projects that fail to benefit the entire community, especially in our most under-served communities. This custom has to stop,” Green said in a prepared release.

“The community deserves more than just a seat at the table –- the community is the table. The Community-Oriented Community Benefit Agreement Bill — which includes input from various community groups across the city — will ensure that large development projects will be able to advance the entire community, not just the favored few.”

The bill will get its first reading on Friday.