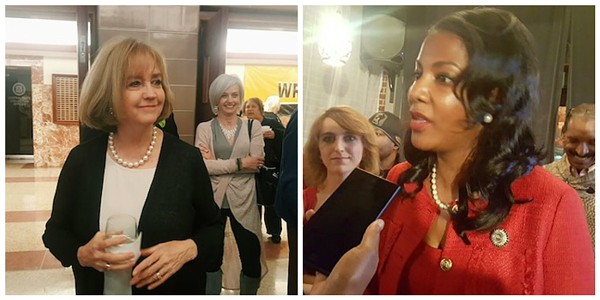 St. Louis Mayor Lyda Krewson may have won her seat by besting a host of other candidates in the city's Democratic primary, but she did it by winning Republican voters.

That's one of the insights in an exit poll of 900 St. Louis voters conducted by the University of Missouri-St. Louis on election day. The 27-page report was released last month, but has not previously been reported on in the media.

The UMSL researchers found that Democratic voters "split almost evenly" between Krewson and City Treasurer Tishaura Jones. But Krewson made her way over the top, beating Jones by just 888 votes, because she attracted more independent voters and a majority of Republican ones. (Both are permitted to cast Democratic Party ballots in the St. Louis primary, so long as they eschew a Republican ballot that day.) "GOP voters, while a small part of the city electorate, helped tip the election to Krewson," the report concludes.

It wasn't just Republicans, of course. "Overall," the report notes, "Krewson's victory was powered by whites, Catholics, Republicans, older voters and those with less education, while Jones was supported by a progressive coalition of young, highly educated and religiously unaffiliated voters."

And overall, the poll notes, how you felt about Krewson vs. Jones was a question of how you felt about the status quo. If you liked Mayor Slay and thought things were pretty good, you likely voted for Krewson. Higher educated voters, and those less happy with the way things are, voted for Jones.

The exit poll confirms anecdotal observations that Jones was able to reach across racial lines. Both Lewis Reed and Antonio French, who finished third and fourth, respectively, received "substantially higher levels of support from non-white voters than from white voters," the report notes. "In contrast, Tishaura Jones received the most votes from non-white voters, but she also got almost one-third of the vote from white voters. The Jones campaign built a biracial electoral coalition."

Interestingly, however, the report pushes back on the theory (offered by many Jones' supporters) that Jones could have won if only one of the black men in the race (Reed, French or Alderman Jeffrey Boyd) had dropped out.

The exit poll suggests that supporters of Jones and French had many similarities — and that French dropping out may well have resulted in a move toward Jones, pushing her over the top.

But that would not have been the case, the exit poll suggests, if Reed had dropped out. "It appears that Krewson and Reed appealed to voters who valued experience and continuity, while Jones and French attracted voters who wanted a new direction in city government," the report notes. "Reed and Krewson did particularly well among older voters, Republicans, non-Metro users and voters who have not attended a protest. ... Thus, it is not clear that Jones would have prevailed if other candidates had dropped out or if ranked choice voting rules were used in the mayoral election."

As the authors conclude, "[I]f Reed had dropped out, it is possible that Krewson's margin of victory would have been larger. Race is very important in St. Louis politics, but by focusing solely on race we may overlook other important sources of division."

The poll also suggests that Krewson may be on the right track, politically, by suggesting a tax hike to increase police pay. It's not just that Krewson voters were more likely to mention "crime" or "downtown development" as key issues, while Jones voters cited "race," "education" or "transportation." The poll also found that a staggering 71 percent of voters supported raising taxes for the police force — and that Krewson voters in particular gave the idea 89 percent approval. Jones' voters also told pollsters they were on board — with 59 percent supporting such an increase.