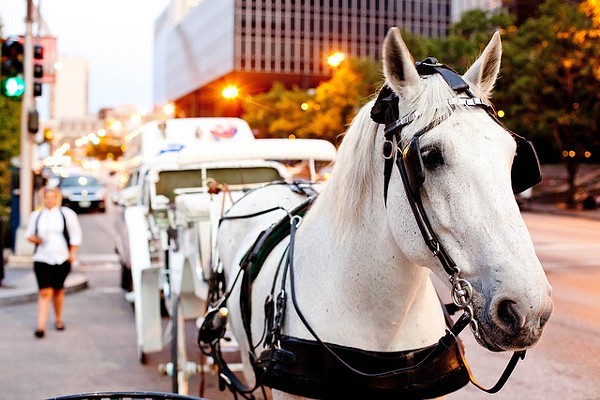 On May 26, attorney Dan Kolde emailed a fiery complaint to the city of St. Louis and the Metropolitan Taxicab Commission, or MTC. The subject: a horse-drawn carriage he'd spotted clopping along a downtown street during rush hour. Writing on behalf of the St. Louis Animal Rights Team, Kolde noted that the carriage company was violating the MTC's street codes that specifically prohibit carriages from operating on public streets between 4 p.m. and 6 p.m.

Kolde demanded the city open an investigation and issue a citation. "Frankly," he wrote, "my client is extremely frustrated and I cannot say that I blame them. For some reason that is lost on me, MTC and the City will not or cannot even enforce the simplest of rules regarding these carriages."

The frustration felt by Kolde's client has been building for years. After a court challenge by the St. Louis Animal Rights Team in 2014, a separate legal agreement with St. Louis city in 2015 formalized the MTC's regulations on horse carriages. The agreement followed a string of troubling incidents which activists argued were reflective of widespread abuse, including one horse's tragic death in Tilles Park in 2013. In 2014, the director of the city's Health Department even tried, unsuccessfully, to banish all horse-drawn carriages from the city.

But a legal challenge by a carriage company operating in the city has put a halt to the MTC's involvement. And no one in either St. Louis city or St. Louis County appears to be trying to fill the void. The MTC hasn't regulated horse-drawn carriages for six months, and in its absence, no one else has either.

That an industry which uses large animals to pull people around busy streets is unregulated might come as a surprise, particularly if the last thing you read about horse carriages was that a city judge upheld the taxi commission's September 2016 cease-and-desist order banning Brookdale Farms from operating carriages in the city. The ruling followed allegations that the Eureka-based company violated taxi commission rules by using unlicensed drivers and illegally working its carriage horses on days when the temperature and humidity crossed the 100-degree threshold.

The company's ban was widely covered by local media, but everybody (including Riverfront Times) missed what happened little more than a month later: Brookdale Farms challenged the MTC's cease-and-desist order in St. Louis County Circuit Court — and won. On October 31, Judge Kristine Kerr stayed further enforcement by the taxi commission, noting simply that its authority under the law covers vehicles using a taximeter. Horse-drawn carriages, she suggested tersely, are not under its purview.

In response, the MTC quietly decided to stop regulating the horse carriage industry altogether, in both the county and city. While the decision didn't make headlines last year, the MTC and its lawyers make no secret of it now.

Following Kolde's May 26 email complaining about a horse carriage operating in downtown during rush hour, MTC attorney Chuck Billings wrote back: "We are under a court order from Judge Kerr in St. Louis County not to enforce the carriage portion of the code."

"We believe the City and the county do have the authority to enforce their own ordinances, and we believe they may legally delegate some of that authority to MTC," Klein writes. "The subject is being litigated. The judge has stayed the MTC’s enforcement of the ordinances."

There's no telling what further litigation might bring, but neither the city or the MTC appear to be rushing to resolve the issue. (It's possible the MTC could find itself paying damages to Brookdale Farms for the attempted enforcement action stayed by Judge Kerr.)

For now, though, the ambiguity has put government officials in a tough position. Koran Addo, spokesman for Mayor Lyda Krewson, tells RFT that the city's Health Department continues to uphold its side of the 2015 "memorandum of understanding" signed with the MTC. But that agreement only covers health inspections on stables and checks on horses' health.

"The Health Department doesn't have any authority to regulate horse carriages," Addo says. "As far as the regulation the taxi commission is supposed to be doing, the city is trying to work something out. Right now things are in limbo."

To Jerry Kirk, who's run Brookdale Farms for more than 30 years, the legal squabbles between animal rights activists, the MTC and local governments are little more than noise, signifying few actual limitations on his business.

"The taxicab commission wanted us to knuckle under. We said no," Kirk tells RFT. "We went to court, and a judge said right away that they've got no leg to stand on."

Indeed, despite the bad press over the MTC's attempt to ban his business, Kirk simply ignored MTC's cease-desist-order and now says that he never considered tweaking how his carriages operated.

"Nothing has changed with the way we do business," he says.

At this point, aside from filing paperwork showing yearly veterinary checkups have been performed and allowing city health inspectors to look at the horse stables, Kirk insists Brookdale Farms doesn't owe regulators anything. It's functioning safely as a self-regulated business, and he says he doesn't need outside agencies enforcing requirements for commercial liability insurance, vehicle inspections, background checks or driver training.

"This is something all the companies have always done. The companies take care of training its drivers, they teach them everything," says Kirk. He maintains that Brookdale Farm's safety and training policies are either equal or more stringent than what MTC's street codes required.

Trusting companies like Brookdale Farms to keep horses safe, though, sounds to animal rights activists like a fox being commissioned to run a hen-house. Without enforcement on the table — and the possibility of consequences for violating the rules — Kolde and the St. Louis Animal Rights Team believe it's only a matter of time before another tragedy strikes.

"This is an industry which has benefited for years from a lack of regulatory enforcement," Kolde says. He points out that temperatures are expected to spike next weekend, posing a possible danger to the horses forced to ferry couples and visitors for hours on end.

"That is just wrong," he says. "The public and the horses deserve better."