With St. Louis' Confederate Monument Under Fire, Peggy Hubbard Steps Up in Defense 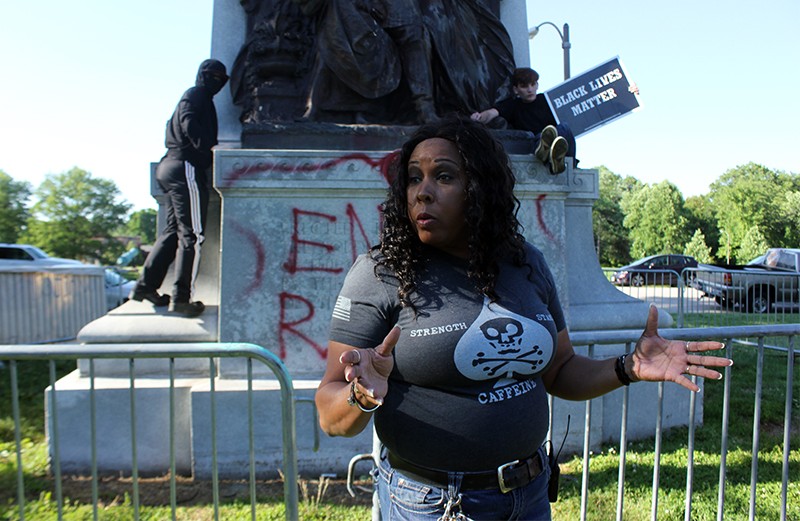 For all the debate surrounding the Confederate monument in Forest Park, the most telling moments from a demonstration on site yesterday afternoon had little to do with history or the Civil War. It was the complicated present that took center stage.

The 103-year-old granite monument — which had recently been hit with graffiti for the second time since last week — attracted a few dozen activists, and a flimsy metal barrier at its base failed to stop protesters with Black Lives Matter signs from clambering onto the structure and lounging against the bronze figures depicting a Confederate family sending a youth off to war.

Those demanding the monument's removal outnumbered its supporters, but that imbalance didn't deter Peggy Hubbard from asking the demonstrators to respect the memorial.

A conservative black woman married to a cop, Hubbard had a viral moment in 2015, making international headlines for a Facebook video blasting the Black Lives Matter movement.

But now Hubbard is going beyond moralizing about black-on-black crime. Having raising more than $6,000 dollars through a GoFundMe campaign, she's organized a "Stand Up For America" rally this Saturday to oppose efforts to remove the monument. 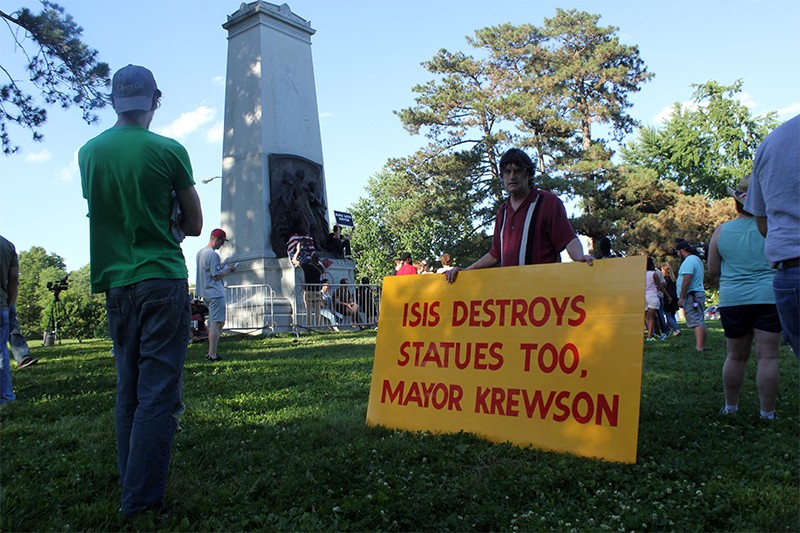 The Saturday rally "is not a protest," Hubbard tells Riverfront Times. In a Facebook video posted over the weekend, she asked attendees to "unite under one flag" — the American one.

Confederate soldiers "might not have been on the same side," she says, "but they were still somebody’s father, somebody’s son, somebody’s husband." She doesn't want to see St. Louis go the route of New Orleans, which recently removed four statues of Confederate leaders.

"If we start removing vestiges of slavery and racial divisions, then this whole country would be flat."

Hubbard says the Saturday rally is intended to foster unity, not shouting matches. Security guards will be on site, and she says St. Louis police officers will be nearby as well. She's explicitly forbade attendees from bringing Confederate flags and, in a Facebook video posted over the weekend, she castigated "grown men" for trying to turn the rally into an open-carrying "dick swinging contest."

"I am not defending the Civil War," Hubbard says. "I am defending the history which it was fought over. This statue represents slavery, but it also represents the freedom that was gained for us. You have to look at on both sides of the fence." 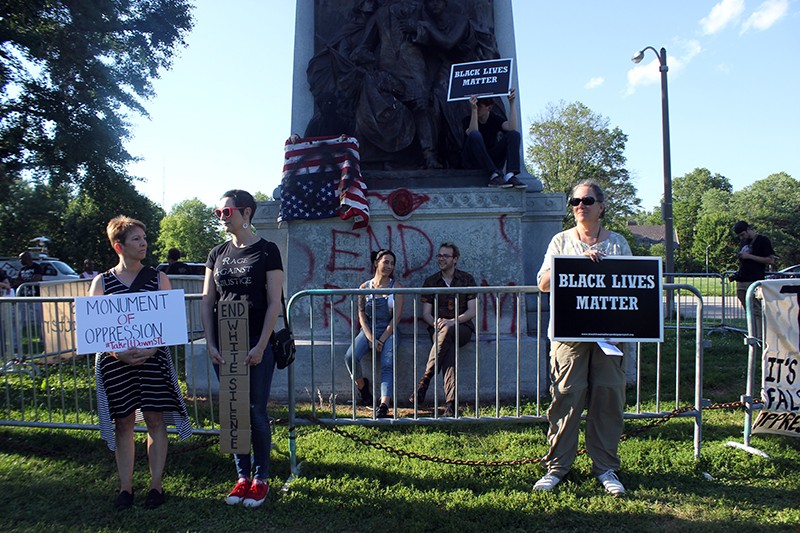 To opponents of the monument, however, Hubbard's arguments ignore historical realities — that the Civil War and its combatants are inseparable from American's heritage of white supremacy, and to separate the two is dishonest. One anti-monument pamphlet distributed Tuesday dubbed the structure "a racist allegory that glorifies white people without educating on the egregious community practice of chattel slavery."

Hubbard says she'd prefer the monument stay where it is. "If I had to compromise," she adds, "I'd put it in Jefferson Barracks, in the section where the Confederate soldiers were interred."

That's one possibility, though details are still being hashed out. St. Louis Mayor Lyda Krewson is expected to announce a plan to remove the monument at some point next month. Actually uprooting the 32-foot-tall shaft could cost upwards of $100,000, far more than the amount raised to date in a GoFundMe sponsored by City Treasurer Tishaura Jones.

That the monument's future could lie in the hands of St. Louis' mayor isn't lost Hubbard and other supporters, who on Tuesday afternoon numbered only a handful compared to the twenty or so protesters who showed up. A small force of police officers were on standby during the demonstration, though they did nothing to prevent protesters from climbing and banging on the monument.

Among the few public supporters of the monument was Bill Hannegan, who lives near the monument, just outside Forest Park. Hannegan showed up early Tuesday afternoon with a large yellow sign taking aim at the mayor.

Later that evening, as a downcast Hubbard and Hannegan looked on, protesters stomped the sign into the grass. 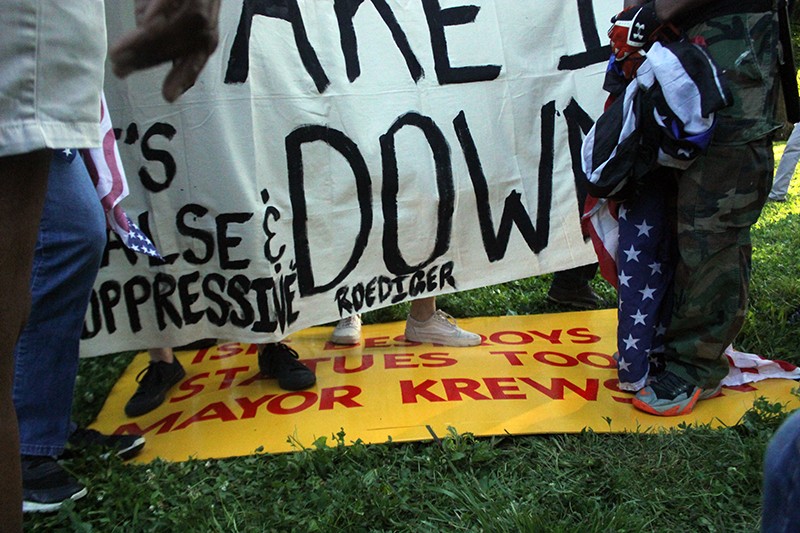