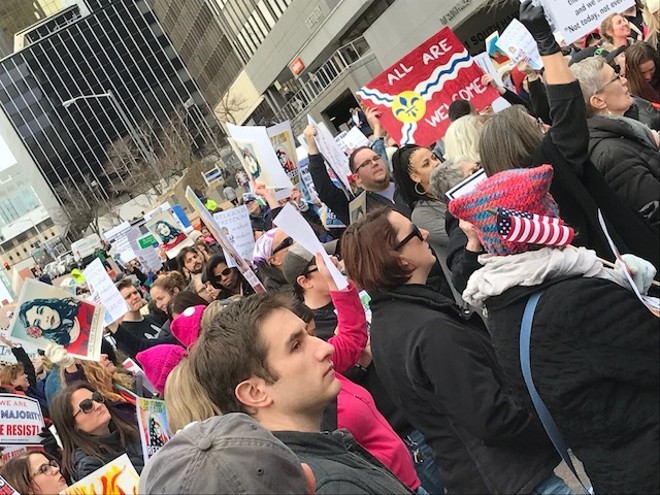 If you're concerned about Donald Trump's ties to Russia — and the role played by that nation in the 2016 election — you can take it to the streets this Saturday.

Indivisible St. Louis, the local chapter of a national movement formed in the wake of the election to resist Trump, organized that huge rally in Clayton earlier this year to advocate for immigrants and refugees. They've also hosted weekly rallies at the office Senator Roy Blunt (R-Missouri), among other actions.

And now they're plotting one of their biggest protests yet: A march through downtown St. Louis this Saturday, beginning at 10 a.m., to call for "urgency and transparency" in the investigation into the Trump administration's contacts with Russia.

Says co-founder Jennifer Slavik Lohman, "The appointment of a special counsel is huge. But most of their work takes places behind closed doors, outside the public eye. This is something we really need to keep at the forefront." She'd like to see public hearings that are both independent and bipartisan — keeping the matter front and center in the public's consciousness.

It's a request that seems to be resonating. "It's not just St. Louis," she says. "We've heard from people as far as Carthage, Missouri, who are planning to attend."

The march will begin at Union Station at 18th and Market streets at 10 a.m. on Saturday, June 3. From there, marchers will make their way to the St. Louis Arch. Scheduled speakers include Sarah Kendzior and Gregory Magarian; the STL Sanders Band will also perform.