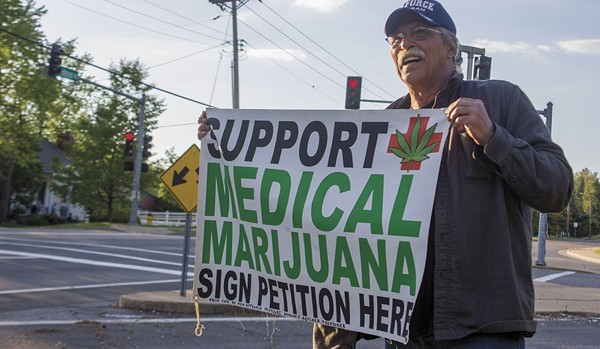 The ACLU of Missouri has filed a federal lawsuit against the Rolla Public Library, which would not let a medical marijuana advocate hold a meeting in its public space.

Randy Johnson, a volunteer with New Approach Missouri, which is aiming to get a medical marijuana measure on the 2018 ballot, tried in February to hold a training session at the library, seeking to instruct volunteers how to “properly and ethically” collect signatures for the new petition.

When the director learned the purpose of the meeting, she told Johnson that he could not hold the meeting because the room is "by the children's area," according to Johnson.

An attorney for New Approach tried to discuss the issue with the library director and its lawyer, but when he and others with New Approach received no response, they reached out to the ACLU.

“The Rolla Public Library violated Mr. Johnson’s fundamental constitutional rights in denying him access to a public forum for organizing a public event,” Tony Rothert, ACLU of Missouri legal director, stated in a press release. “His right to free speech was infringed upon by the library when it denied him access to the meeting rooms rather than following the library’s own policies.”

Diana Watkins, director of the library, did not immediately return a call seeking comment. She also declined comment on an earlier story about the controversy.

Medical marijuana advocates are organizing training for volunteers in hopes of making state ballots in 2018. They nearly had a medical marijuana measure on the ballot in 2016, but in September, a judge invalidated 10,000 signatures from people who signed petitions in the wrong voting district. That meant New Approach did not have enough signatures.

After the library denied Johnson use of the meeting room, he relocated the training to the Centre, a community center in Rolla, which charged him to use the space, according to the suit.

The suit points to library policy concerning its public meeting rooms, which are available free of charge.

"Requests for use of the facility shall be made through the library staff who will book on a first come, first serve basis no more than 30 days in advance," the library website states. "The library reserves the right to approve or disapprove any application."

The ACLU contends that New Approach Missouri "was denied because of their political viewpoint," the suit states. "But for the content of and viewpoint expressed in plaintiffs’ request, plaintiffs would not have been denied a meeting room."

The plaintiffs are seeking compensation from the library for damages and attorneys’ fees and costs.

Asked whether the ACLU has taken on cases from medical marijuana advocates elsewhere, Rothert writes, “It is not uncommon for small, more localized government entities to forget that they are the government and, thus, not allowed to favor or disfavor expressive activity based on its viewpoint. In addition, governmental officials seem to get confused by conflating the lawful process of advocating for an update of our drug laws with the advocacy of illegal conduct.”

Michael Hill, an attorney with New Approach, said in recent years he had to contact a municipality in the St. Louis area — he declined to name which one — after a pro-cannabis organization was denied from participating in an Earth Day festival. After speaking with an attorney, the organization was allowed to participate.