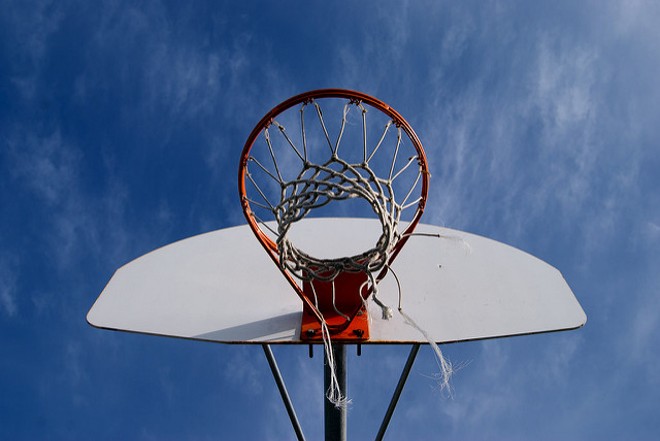 Among St. Louis' 109 public parks, basketball courts are a relative rarity. Only 25 of them have the necessary court and hoops, and a map of their distribution shows a distinct bubble around the center of the metro area.

Most glaringly, despite its many improvements and splendor, Forest Park remains hoopless. That could soon change.

Putting basketball courts in the 1,300-acre park has been tried before, including a 2016 effort by then-Alderman Antonio French. But a new bill, sponsored by 23rd Ward Alderman Joe Vaccaro, just had its first reading last week. If passed, the measure would instruct the city to construct four well-lit basketball courts in Forest Park by October 1.

Vaccaro was reportedly inspired by French's 2016 bill, though it's interesting to note that Vaccaro and French approach the issue with very different backgrounds.

French looked at the absence of courts through a racial lens. Last year, he compared Forest Park's lack of basketball courts to an "unwelcome sign" for black residents, and "a signal that the group that the sport most appeals to is not welcome or encouraged to come to the park." Adding courts to Forest Park, said French, would be a "small step" in helping the city "move past our prejudices."

Vaccaro's history with basketball courts, however, has involved opposing nuisance and harsh language.

Vaccaro himself was instrumental in moving a court in his own south city ward. In 2014, a neighborhood petition sought to eliminate the hoops from Tilles Park, but instead of erasing the basketball courts completely, the alderman found a compromise. He used money from a bond issue to relocate the courts farther from a playground.

The decision wasn't a matter of racial prejudice, he told St. Louis Public Radio (KWMU) last month, but a matter of public decency.

“What it is is a certain age group that likes to play, in their teens and 20s, it’s M-F this, and M-F that," Vaccaro said. "I don’t think anyone has ever sent me any email telling me that, 'Gee, we have a certain group of people playing basketball and I just don’t want to see them.'"

Some neighborhood's resistance to basketball, however, has not gone unnoticed by black city residents. Alderman Terry Kennedy, who represents the 18th Ward in north city, tells Riverfront Times that associating basketball with rowdy crowds or illegal activity "borders on stereotypes."

"I don't see any reason why there hasn't been any basketball courts at Forest Park," Kennedy says. "There is a general feeling basketball courts bring out young black men, and with it there is a stereotypical idea that it's going to bring crime. Those two things are not synonymous. It's a stereotype that the city needs to work through."

Kennedy supports building basketball courts in Forest Park, though he says he hasn't yet read though the details of Vaccaro's bill.

Vaccaro's bill, Board Bill 36, directs the city's parks department to track the courts' usage and to report the data to the Board of Aldermen on annual basis for the next five years. The board will use that data to determine whether additional courts need to be built to meet demand.

The construction would bring lasting change to the face of Forest Park, and it won't come without careful planning. If passed, the bill would vest Greg Hayes, who heads the city's Department of Parks, Recreation, and Forestry, with "sole discretion" to determine to the courts' locations in Forest Park.

In a Friday statement emailed to KSDK (Channel 5), Hayes noted that Forest Park's "master plan" — which was approved in 1995 and laid the groundwork for a decade-long, $100 million restoration — was drawn up without basketball courts in mind.

"Although outdoor basketball courts were not envisioned in the Master Plan, the plan calls for a balance of diverse open space, cultural and recreational needs and activities," Hayes said. "Any proposed amenity/project is reviewed to determine its impact on all other existing systems in the park. This type of process lends itself to informed decision-making with respect to the spirit of the Master Plan. In addition, any proposed capital project for Forest Park must go through a deliberate 9 step design/construction process with the Forest Park Advisory Board."