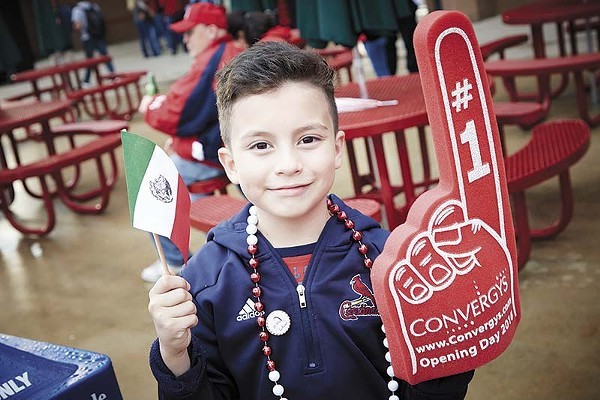 St. Louis has the smallest Latino population of any big city in the country — in fact, of the nation's 25 largest metro areas, we're the only one that's less than five percent Latino.

So why is that?

If you read Doyle Murphy's cover story last October, you got the complicated explanation, which basically comes down to immigration patterns. Writes Murphy,

Anna Crosslin, president and CEO of the International Institute, says Hispanic immigration routes or "flow patterns" traditionally split off south of St. Louis in Missouri's bootheel, with one path running into Illinois toward the Metro East or Chicago. Another has tracked west toward agricultural areas of Nebraska and Iowa. St. Louis historically has gotten skipped.

But if you read "Ask a Mexican," Gustavo Arellano's syndicated column providing frank (and funny) answers to your questions about Latino culture, and Mexicans in particular, you'll get a slightly different answer.

In response to a question this week about St. Louis' miniscule Mexican population, Arellano raises, and quickly dismisses, the idea that the Gateway City just might be "muy racist." After all, he notes, we've done well by the Bosnians.

Instead, he settles on a second theory: Mexicans would rather live in Chicago.


St. Louis is just a bit more than four hours away from Chicago, the ciudad with the second-largest Mexican community in the United States, a community with roots that go back nearly 125 years. Nothing against the Lou, but why would Mexicans stay in the Jalostotitlán of the Midwest when they can move to the Jerez?

Now,"Jalostotitlán" is not necessarily the sister city we'd aspire to. It's apparently got 71,000 souls and an economy largely kept afloat on agriculture and remittances from family members in the U.S. A glittery metropolis, it ain't.

Bigger picture: "Ask a Mexican" has concluded that we're not extremely racist, but we're just not as attractive as Chicago. Umm, thanks?

For more on the Latino community in St. Louis, check out Murphy's story, which focuses on the St. Louis Cardinals' first-ever Spanish language broadcasts. Now, it should be noted that after last fall's successful trial run, the Cardinals are adding more games en Español in 2017. So no disrespect to Arellano, a fine journalist (and also editor in chief of our former sister paper, the OC Weekly), but perhaps the better question for the Midwest's Latino population is this: