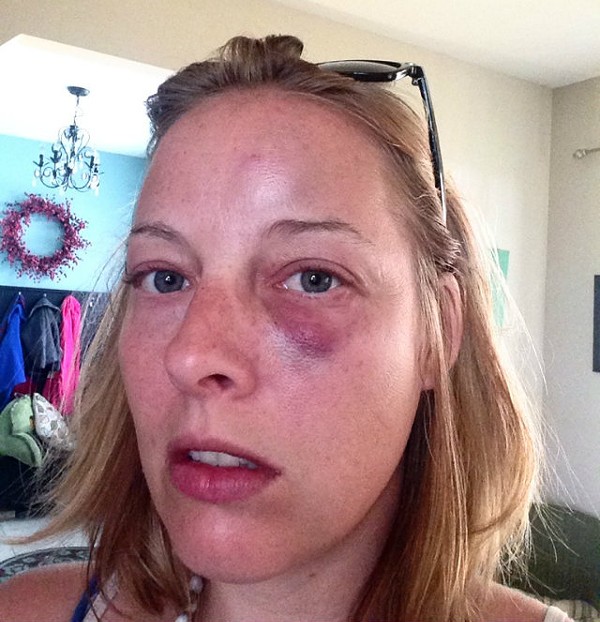 On Labor Day weekend in 2014, Megan Rieke's mother, a retired schoolteacher, threw a party at her home in Crestwood. After the other guests left, Rieke and her mother and brother sat around on the back patio, listening to the radio.

That's when a cop car pulled up. Around 1:50 a.m., the officer, Kevin McFarland, shone a spotlight on the family. And then he gave them an order: Go inside, he said, or he would "take everyone to jail."

After Rieke's mother had a short conversation with the cop, the three agreed to go in. But Rieke couldn't resist a parting gesture: She silently flipped the officer the bird.

And McFarland apparently was livid.

"He bursts into her house, slams her head onto a table and then the countertop right in front of her mother," says Rieke's attorney, James Brady of Kansas City.

Then McFarland marched Rieke out to his patrol car and slammed her, again, onto the hood of the car, Brady alleges. Cuffed and thrown in the vehicle, she was arrested and taken to the Crestwood Police station.

In his report, McFarland alleged that Rieke had said "fuck you" while flipping him off — and booked her on a charge of "Disorderly Conduct (Language)."

A mother of three and an artist who lives in Kirkwood, Rieke denies she ever dropped an f-bomb, and a Crestwood Municipal Court judge apparently agreed — he issued a "verdict and judgment" finding her not guilty last September.

But the incident isn't going away. Rieke was left visibly bruised, with photos to prove it. And now Brady has filed a lawsuit on her behalf in federal court, alleging a violation of her first and fourth amendment rights, as well as malicious prosecution. She spent two years fighting the disorderly conduct charge — a charge that Brady says is not only untrue, but unconstitutionally vague on its face.

As Brady notes, case law is clear: extending your middle finger is, in fact, protected speech under the first amendment. Even if it wasn't wise, Rieke had every right to do it.

In light of that, Brady alleges, McFarland had to come up with a pretext for arrest. "To make that complaint, he had to say she said something," Brady says.

But the municipality's disorderly conduct statute is also problematic, Brady says. It forbids, among other things, "using loud or profane language within the hearing of other persons; cursing or threatening any person or annoying persons with threats or abusive or foul language..." That's even though the courts have repeatedly held that police cannot arrest someone merely for using profanity in public. Still, it took two years to beat the charge in court.
Crestwood Mayor Gregg Roby did not return a call seeking comment yesterday.

After Rieke was booked in the early hours of the morning of August 31, 2014, the sergeant on duty drove her back to her mother's home. He told her that McFarland had "just got off the front line in Ferguson," Brady says. Michael Brown had been killed just a few weeks earlier, and protests and riots had left the metro area on edge.

But nothing about the situation should have suggested to the officer that he was in any danger. The family later learned that a new neighbors' air conditioner was broken, so they had been trying to sleep with the window open. Instead of asking Rieke and her family to keep it down, they apparently called the cops. That was all it took.

"This wasn't one of these situations where he was going into a dangerous neighborhood," Brady says. "This is a middle-class soccer mom who just happened to have a little bit of an attitude."

Ironically, in the days before the Labor Day party, Rieke had been working on a mural related to the Ferguson unrest. Its message: "Heal STL."