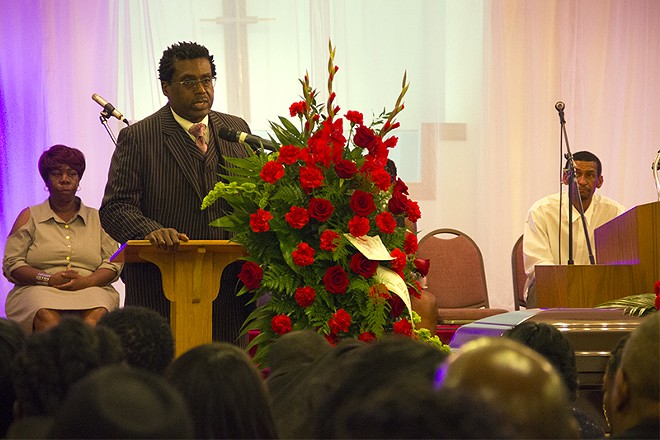 The day after Edward Crawford's death, his attorney Jerryl Christmas scrolled through the coverage on the St. Louis Post-Dispatch website. Unsurprisingly, the lead image on the paper's May 5 story was the Pulitzer Prize-winning photograph that showed Crawford winding up to throw a tear gas grenade during the Ferguson protests.

Beneath the photo, next to the caption, was a green button with the words, "Buy now."

"I bought it that day," Christmas says. "Just to prove that even in death they’re still profiting off him."

Police fire tear gas at protestors for the third night in a row in Ferguson, Mo. #Ferguson #MikeBrown pic.twitter.com/BEoZT5yjkU

Crawford, says Christmas, had long been frustrated by the Post-Dispatch's seemingly ironclad ownership of the image that made him famous. Bootleg t-shirts, blog posts and social media accounts continually ripped off the photo, and such unauthorized usage invited take-down notices from the newspaper. Yet Crawford, who had five children, was no different than anyone else seeking to use the photo. Even though he was its subject, he had no rights to the image.

"He reflected on that all the time," says Christmas. "He could not understand how he could see his image worldwide, and the Post owns it and sells his image, and him not having any access to it."

Crawford's official cause of death has yet to be determined, pending an autopsy, but police believe the 27-year-old died from a self-inflicted gunshot to the head. Citing witnesses, investigators have said that Crawford sounded distraught in his final moments, and that he was complaining about "personal matters." Tragically, the reported circumstances point to suicide.

Crawford could have been worrying about any number of things on the day of his death, including the charges he was facing from his arrest during the Ferguson protests more than two years ago. But Christmas says his client was clear on one point: Crawford wanted Christmas to fight the Post-Dispatch for rights to use the photo.

"I had talked to Edward that Thursday," says Christmas. "I had drafted a letter to the Post trying to reach an agreement. It was shortly after I had faxed it on Friday morning that I learned that Edward had passed."

And that fight, Christmas says, will continue, even with his client's passing.

In response to questions about Crawford and the photo, Post-Dispatch spokeswoman Tracy Rouch writes, "We declined Mr. Christmas’s request for promotional use of the photo." (It's also worth noting that the Post-Dispatch's May 5 story reporting on Crawford's death currently does not show a "Buy Now" button for the photo of Crawford, although the option is present on previous stories.) Rouch declined further comment on the details of the newspaper company's communication with Christmas, saying such correspondence is "confidential."

Christmas says he is not deterred by the newspaper's initial rejection. Crawford's children deserve compensation from the photo, he says; he won't rule out a lawsuit.

Legally speaking, however, the Post-Dispatch and its corporate owner, Lee Enterprises, appear to be standing on solid ground. In general, U.S. copyright law considers ownership of a news photo like this one to belong to the media outlet that shot it, not the person depicted in it. (The photo would be an example of "work of hire," meaning that the newspaper, not photographer Robert Cohen, retains ownership.)

Christmas acknowledges that prevailing copyright law doesn't appear to be on his side. Still, he believes that Lee, and the Post-Dispatch, have a moral responsibility to Crawford's family.

"I'm going to challenge that, laws get changed by challenging them," he says, although he declined to get into specifics. "If we’re unable to resolve it," he adds, "it’s going to be lawsuit. But I don’t believe the corporate heart of the Post is totally hard."

Along with appealing to the Post-Dispatch's good will, Christmas hints that the newspaper could soon be facing pressure from the public.

"There’s nothing legally that prevents the Post from sharing the rights of the picture with Edward," Christmas says — perhaps retaining the copyright, even while also authorizing the family to use the image for some commercial purposes.

The money derived from the photo wouldn't just be lining someone's pockets, he says, but supporting five kids who suddenly have no father. To Christmas, granting Crawford rights to the photo "would have been, prior to his death, the proper thing to do."

Now that Crawford is gone, he says, the newspaper can still do the right thing.

"I think about it all the time now," Christmas says. He even raises the possibility that the Post-Dispatch's grip on the photo factored into Crawford's death. If things had gone differently, he suggests, maybe Crawford would still be alive today.

"Had the Post done that in the very beginning," Christmas says, "there's no telling what situation Edward would have been in, as opposed to the situation that he died in."