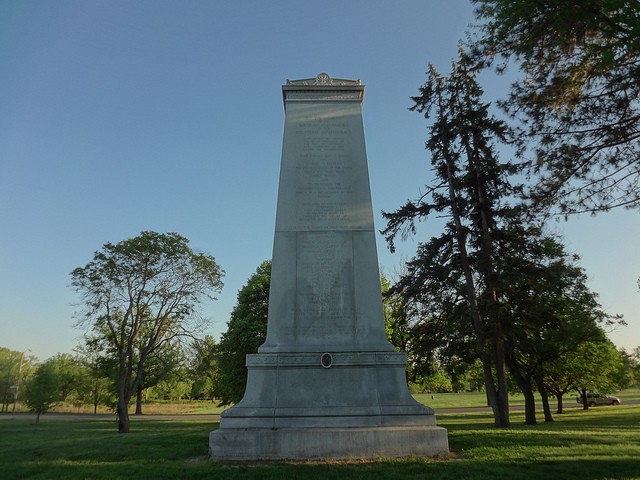 Newly minted Mayor Lyda Krewson has made one thing crystal clear this week: She wants to see the controversial Confederate memorial removed from Forest Park.

“The mayor wants it down,” Koran Addo, spokesman for Mayor Lyda Krewson, told the Post-Dispatch in an article published Wednesday morning. “She understands it’s an emotionally charged issue. It’s hurtful to so many people."

There's one big catch though: money.

“There are several options,” Addo said, “and each option costs a lot of money.”

Enter St. Louis treasurer and former mayoral candidate Tishaura Jones. On Wednesday morning Jones sent out a tweet, wondering whether people would be willing to help the city out and donate some money to the cause (easy to see how she got that treasurer job!):

If I started a @gofundme to take down the Confederate Statue in Forest Park, would you contribute?

As it turns out, the answer is "yes" — and by noon Jones set up a campaign on the crowdfunding website GoFundMe. As of the time of this writing, "Take It Down St. Louis" has already raised more than $1,000 of its $25,000 goal, with donations by 30 people in a little over three hours.

"In an effort to join cities across the country that are removing confederate monuments, Treasurer Jones believes that this monument has no place in Forest Park and needs to be removed and should have been done so years ago," Jones' office says in a statement. "Since the City has cited a lack of funds as a reason for not removing the monument, she decided to launch a campaign to help raise the funds needed to remove the Confederate Memorial from Forest Park."

It's not entirely clear how they landed on that $25,000 figure, nor what, exactly, the money will be used for if the goal is met. Suggestions for what should happen to the structure have ranged from demolition to burial to putting it on display in a museum; each comes with its own unique set of challenges.

It's not the first plan hatched in recent weeks to remove the monument while saving the city money. In late April Earthbound Brewery made headlines when its owner, Stuart Keating, offered to tear the monument down for free. That led to a full-scale backlash from would-be citizens of the Confederacy, who flooded Earthbound's Facebook page with one-star reviews in an attempt at online revenge.

Jones' efforts have brought on that same backlash, with the comments section of the campaign rapidly filling up.

"This is ridiculous. It is a part of history. We have better things to spend money on. Move forward!" writes Vicki Kremer.

"If history is being destroyed then when do all of the Martin Luther King monuments/statues/roadways/bridges etc...coming down???" Monica Lewis wonders.

"This is history! You know there would be riots in the streets if we removed MLK stuff. Ridiculous! I think there should be a Go Fund Me to leave it up. Restore it. Or make a new one if they remove it," writes Melissa Jane.

(Removing memorials to Martin Luther King Jr. is a subject that actually comes up rather frequently in these angry comments, which makes one wonder if the people typing them are really thinking about exactly what they're not so subtly implying here. Isn't your whole position that this has nothing to do with slavery, that it is just about history? Why are you bringing up civil rights leaders? But we digress....)

In any case, it will be interesting to see how this plays out. During his tenure, former Mayor Francis Slay also announced that he wanted to see the memorial torn down — in 2015. Despite that proclamation, the monument stands, leaving one to wonder whether Mayor Krewson's position is similar political theater.

If Jones' campaign reaches its goal, it's your move, Mayor Krewson.