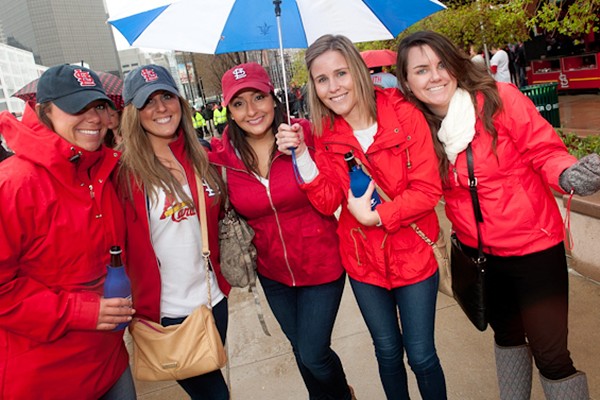 There are plenty of reasons a woman might conceivably enjoy a trip to Busch Stadium in 2017. After all, there are yummy things to eat and all that great fashion for sale on the concourses (Cardinals' shirts in red or white ... you pick). Oh, and now they even sell cocktails with rum and cranberry juice so you don't have to drink all that gross beer (yuck).

And hey, ladies! There's a bonus on May 17. For that game, you can even score some nifty jewelry! Now you can really get excited about accompanying your boyfriend to a baseball game!

Or at least that's what the Cardinals' marketing team seemed to suggest this morning, with an early-morning tweet today promoting its "replica 1967 World Series championship mystery ring."

"You love baseball, she loves jewelry," the club tweeted through its official account, @cardinals. "On May 17th, it's a win-win."

The same message was also posted on the team's official Facebook page.

Condemnation came fast and furious, in both mediums.

"I love baseball, not impressed by jewelry," one woman wrote on Facebook. "Don't insult female baseball fans. Added another, "Hi St. Louis Cardinals. While I love you, as a female fan, I resent being reduced to the idea that I would need some sort of a flashy 'bribe' to attend a sporting event. Things like this perpetuate the idea that women are incapable of having sports knowledge or even participating in sports, both on the field, in the media, and behind the scenes. (And, for what it's worth, the "jewelry" you're referring to here is a replica of something that male baseball players earn and wear, and something that I'd imagine many people, male and female, would love the opportunity to wear)."

Inevitably, there are now some dudes on the team's Facebook thread arguing that anyone complaining about the messaging is a "snowflake" — reason enough, as far as we're concerned, to suggest the campaign was a bad idea. (Cue that one RFT reader suggesting "liberalism is a mental disease" in 3, 2, 1 ....)

But really, beyond needlessly inflaming the culture wars, why insult half your fan base? Surely the Cardinals know that the team has hundreds of thousands of female fans who love baseball much more than they love jewelry. Go to any Cardinals game, any day of the week, and you'll find a huge contingency of true-believing, jersey-wearing women rooting just as loudly for the Redbirds as their male counterparts.

And beyond that: Seriously, what woman in her right mind who doesn't already love baseball would welcome a ring this clunky-looking? The only person who'd want a ring like this is someone who already lives and dies over Cardinals' baseball, someone who cares that the 1967 team clobbered the Red Sox and knows that Orlando Cepeda was, very briefly, not just the man but our man. Someone who, yes, loves baseball — and "she" loves it just as much as the "you" the promotion is aimed at.

But hey, don't take our word for it. We believe Twitter user @pixleyamelia speaks on behalf of many, many women with a very real warning:

@Cardinals If someone gave me this ring and said, "I like baseball, you like jewelry," he would 100% get punched in the mouth with this ring


So yeah, all you guys out there who just love baseball and can't wait to buy tickets on May 17 so as to obtain this "mystery ring" for your jewelry-loving sweetie: Might want to think twice about this one, OK?