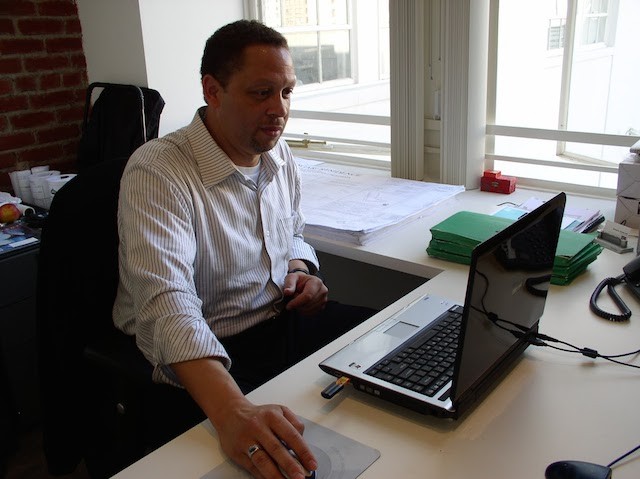 Barry Thomas, the man who kept St. Louis' inimitable Evening Whirl in the black and on newsstands throughout the city for more than a decade, has died after a battle with cancer.

Thomas, 57, served as the owner, publisher, president and CEO of the newspaper, taking over after the 2003 death of his father, Ben Thomas. Working from his home in California, the younger Thomas did everything from page design to writing occasional pieces to manning the site's Twitter presence, says managing editor Brian Ireland.

But the Whirl will remain the Whirl even with his passing.

Says Barry Thomas' brother, Kevin, "It was our father's wish that a family member keep the paper going. And in keeping with my father's wishes, I will work extensively with the paper."

While other media outlets have undergone cataclysmic change during the fourteen-year period from Ben Thomas' death to his son's, that was not true of the Whirl. The tabloid has a Twitter account and a website, but its content is not online. Its focus remains on its print edition, which is sold at gas stations and convenience stores around the city.

Unlike lesser papers, the Whirl has never aimed to be the paper of record. By covering mostly crime, and doing it with patter that would make Raymond Chandler envious, editor-in-chief Anthony Sanders, Ireland and a handful of other contributors rely on readers who genuinely enjoy its coverage, and are willing to pay for the privilege. It is impossible to read with a sense of duty or obligation.

Ireland says he and Sanders are cautiously optimistic that Thomas' death won't mean big change. Thomas had long been based in California, and while he was involved in each issue, Ireland says he was far from a micromanager. (In fact, Ireland says he met Thomas only once during his years at the paper.) Thomas was the big-picture guy, the guy who kept the 79-year-old institution on its even keel, but not a guy who told them what to write or what angle to take.

One exception, Ireland notes, was political coverage, which the Whirl had added more recently in hopes of tapping into political advertising. And that wasn't the only change Thomas was looking at, Ireland says.

"He was trying to get the paper into a way that younger people might be interested in," Ireland says. "Me and Anthony are more old-school; we put our eggs into the print basket. His job was to complement us by adding the tech side. He was working on revamping that when he got sick — working on having a place where you could access the stories online for free."

Barry Thomas lost his battle with cancer on the morning of May 2, a little less than a year after being diagnosed, according to Kevin Thomas. The cancer started in his kidneys and spread to his liver and lungs. An operation removed a tumor in October, but the cancer proved more aggressive than doctors had hoped.

Kevin Thomas, who is also based in southern California, says it is still too early to say how exactly the Whirl will change, or not, with its publisher's passing. But, he promises, "The paper is still going to continue. It's been around 80 years. Very few papers have lasted that long."

Of Barry Thomas, his brother says, "He was a very unique gentleman, one with very few enemies and a lot of friends. He was an exceptional man."