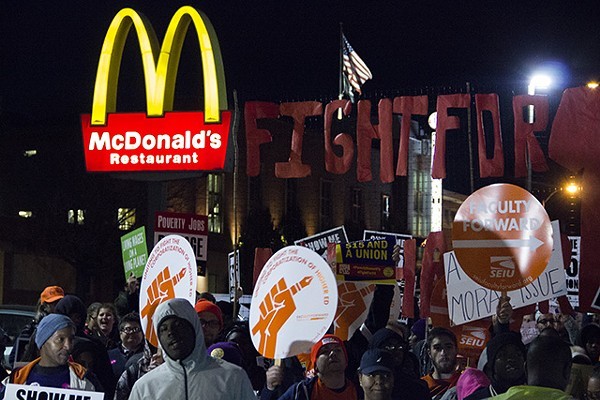 The court challenges are over. The grace period has ended. Now employers are going to have start paying up.

The only exceptions come for businesses that gross less than $500,000 a year or have fewer than fifteen employees. (Employees who work less than twenty hours a year are also exempt.)

The minimum wage in Missouri is currently $7.70.


[Tomorrow] 35,000 St. Louis workers received a long overdue raise — and St. Louis joined the roughly 40 other US cities and counties that have adopted local minimum wages. Research in Chicago and other cities shows that these policies are improving workers’ lives without costing jobs. The extra $1,800 a year the average St. Louis worker will earn will help tens of thousands of struggling families — and help the economy as workers spend their paychecks at local businesses.

But the Missouri legislature is not just refusing to raise the state’s paltry $7.70 minimum wage — it is considering overriding the will of local voters and elected leaders by stripping cities of the power to address wages, even though Missouri voters strongly support a higher minimum wage.”


Until that happens, though, some business owners fear that the increase could have a major impact on their viability. They worry that now even those paid above $10/hour will ask for wage increases to compensate for lower-skilled workers being brought to their level. And with competitors just across the county line being able to pay significantly less, they worry the playing field is no longer level.

Some are even putting their money where their mouth is. Kakao Chocolate the chocolatier featured in our 2015 story, has since closed its flagship store on South Jefferson and combined its operations at its shop in Maplewood.

Show Me $15 activists, though, are jubilant. It was their campaign to raise the wage to $15 that led to the compromise passed by the Board of Aldermen back in 2015.

“After two years of standing up, speaking out, and going on strike, we have finally won the raises we were promised back in 2015. Republican lawmakers and their corporate donors have already stolen $35 million from us by holding up our raises, but they won’t steal one penny more. This raise to $11/hour will help us keep the lights on and put food on the table, and is a major step to getting the $15/hour and union rights we’ve been demanding for the past four years.”