Protesters Channel A Handmaid's Tale at Missouri Capitol, With Attire Straight Out of Dystopia

White bonnets, red cloaks — the women protesting at the Missouri legislature this morning looked like something right out of a Margaret Atwood novel.

And yeah, that was intentional. A Handmaid's Tale is enjoying new relevance 32 years after it was first published, with a new series on Hulu debuting to rave reviews (and earning a second season) and endless think-pieces about how the subjugation of women it details perfectly describes Trump's America (even if contrarian commenters argue it's actually Hillary supporters who best embody it).

Inspired by their sisters in Texas, the Missouri women are protesting a budget that would effectively eliminate the state's "family planning" funding, along with an amendment that would bar any organization that provides "abortion services" from receiving state funds. Critics say it could jeopardize the state's entire Medicaid program — and, if precedent is any guide, is likely to be blocked by the courts anyway.

According to a Planned Parenthood press release:

In The Handmaid’s Tale, the government starts to control women by taking their credit cards. In Missouri, lawmakers are trying to control uninsured women by dictating where they may and may not get their health care.

The handmaids visited the House and Senate chambers before walking through the rotunda with signs like “Make Margaret Atwood Fiction Again,” “The Handmaid’s Tale is not an instruction manual,” and “Gilead took credit cards. MoLeg is taking Medicaid cards.”

No word yet on whether the protest has caused any legislators to think twice about their positions on abortion, family planning or the budget in general. But how's this for dystopian: NARAL Missouri Executive Director Alison Dreith tells us that even this simple, restrained act of protest theater drew pushback: Security in the state House of Representatives actually made the women take off their bonnets.

The Senate, however, let them stay on. See, things are not completely totalitarian in Missouri ... yet. 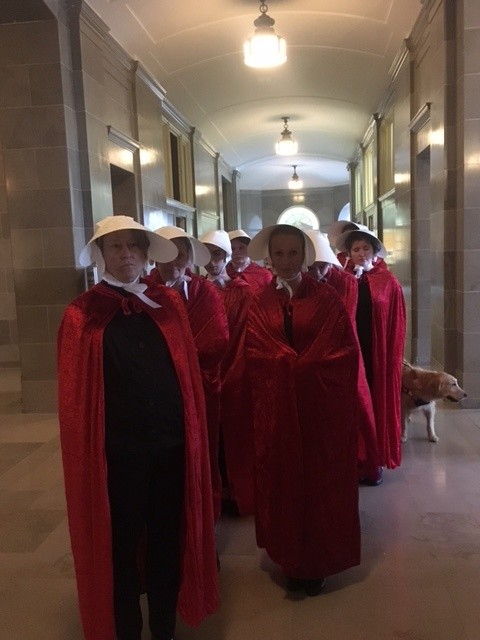