Why I Marched for the Climate in Washington, D.C., This Weekend 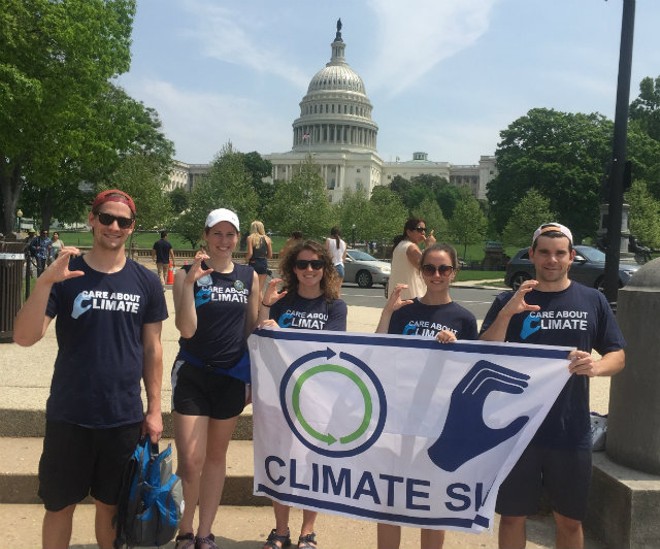 “Why are you here?” That was the question of the weekend at the People’s Climate March — a demonstration on behalf of the environment that drew tens of thousands of people to the heart of Washington, D.C., on Saturday.

Our small group of Saint Louis University students likely heard this question more than most, because we stood out demographically throughout our journey. On the exhausting thirteen-hour bus ride from St. Louis to D.C., we were decades younger than the seasoned Sierra Club activists that led us on our journey, and at the capital, we represented a small minority from the Midwest. Even as we made our way to line up with the other “Guardians of the Future,” I had already been asked the question several times. I still didn’t have my answer.

Marching through the city, I learned other answers. There were groups speaking up for the bees and the turtles, grandparents whose signs had pictures of their grandchildren that simply said “For Nina” and “For Michael,” and African American youth chanting “Environmental justice is racial justice.” Many groups from around the world were demanding clean water and speaking out for the protection of their indigenous lands. Why was I, a 21-year-old girl from St. Louis, who had never suffered a consequence of climate change, part of this movement?

The answer did not hit me until after the march, when the crowd was gathered at the Washington Monument. One of the performers started his act by telling the crowd, “You cannot be an environmentalist without being a humanitarian.” He explained that if you have not made that connection, then you are missing something, and you won’t see the outcome you want until you start viewing your environmental activism as a form of humanitarianism. Finally, I was able to articulate why I was there. Yes, I am concerned about the bees and the trees, but those concerns grew out of a fundamental concern for the welfare of other human beings. That humanitarianism is what powers my activism.

Much of St. Louis, I think, is still missing that link. It would be an understatement to say that St. Louis has fallen behind many other U.S. cities in its sustainability efforts. While we may be well-protected from rising sea levels, we have found ourselves on the front line of serious social justice issues in the past few years. In order to effectively address these issues, our community needs to understand that human-induced climate change does and will continue to affect poor communities and communities of color significantly more than privileged, predominantly white communities.

For example, the World Bank found that the poorest communities in African and Asian countries are most exposed to natural disasters like floods, drought, and heat waves, which will all become more frequent and severe due to climate change. Additionally, in the U.S., people of color make up the majority of those living in neighborhoods located in close proximity to hazardous waste facilities, and African Americans are 79 percent more likely than Caucasians to live in neighborhoods where industrial pollution causes the greatest health danger.

When heat waves sweep over our city this summer, some will be able to turn up the AC and some will be left vulnerable. When basements flood after weekends of intense rain like this one, some can afford to make necessary repairs while others will be left breathing in mold over the coming months. Those who have contributed the least to these issues will suffer the most from their consequences. For these reasons, St. Louis cannot keep putting environmental issues on the back burner while trying to address our pressing problems of social inequality. We also cannot keep pressing forward in our limited sustainability efforts without input from the marginalized communities in our area. Continuing down this path would be inconsistent and hypocritical.

So, what can we do now? As a student at Saint Louis University at a time when its Office of Sustainability and Benchmarking has fallen victim to sweeping budget cuts, I will work with other students to remind the University’s decision-makers that a commitment to sustainability is a vital part of the school’s commitment to improving racial equity and social justice in the community, and they cannot set one commitment aside without imperiling the other. 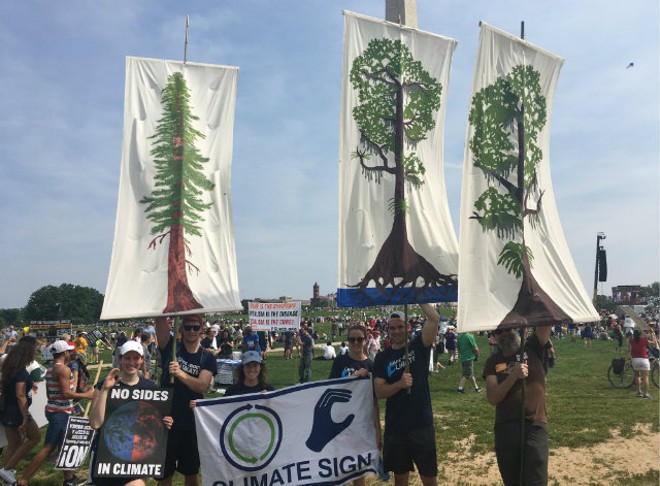 To those outside of the SLU community, I encourage you to broaden your mindset regarding what it means to be a climate activist and to live sustainably. When you recycle a piece of paper, you are not just acting on behalf of a tree, but on behalf of lower-income communities living in close proximity to our ever-expanding landfills. When you turn off the lights as you leave the room, you are not only contributing a little less CO2 to the atmosphere, but also working to bring down St. Louis’s childhood asthma rate, currently more than double the national average, by taking responsibility for a little less sulfur dioxide emitted from the coal power plants in our area.

Environmentalism is humanitarianism, and environmental justice is social justice. That is why I attended the People’s Climate March and that is why I encourage the St. Louis community to start making serious strides to mitigate climate change.

Madeline Emerson grew up in the Lindenwood Park neighborhood of south St. Louis, attended Rosati-Kain High School, and is now a junior Environmental Studies major at Saint Louis University and working as SLU’s Sustainability Intern. Contact her at memerso2@slu.edu.

The RFT welcomes concise, well-reasoned essays on topics of local interest. Contact Sarah Fenske at sarah.fenske@riverfronttimes.com if you've got something to say.