Remembering the Black Soldiers Who Bicycled Nearly 2,000 Miles to Get to St. Louis 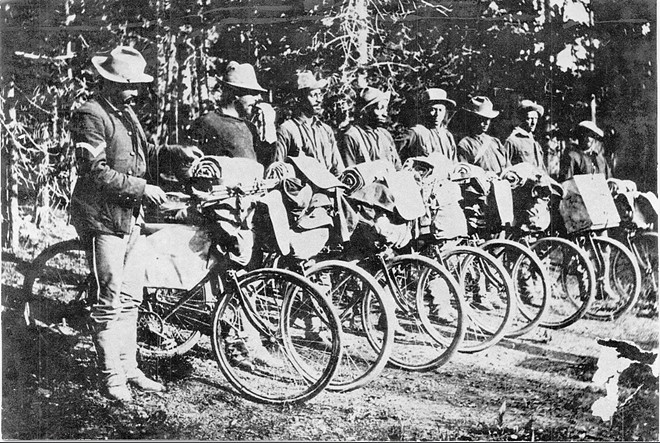 If you think biking across Forest Park is an easy feat, even in the spring wind and rain, do we have a cycling route for you.

In June 1897, twenty soldiers of the U.S. Army's all-black 25th Regiment — nicknamed the “Buffalo Soldiers” for their efforts in the Indian Wars of the 1870s — departed from Fort Missoula in Montana. Their mission: to test bicycles for the army. What followed was a 41-day ride of more than 1,900 miles that crossed five states, ending in St. Louis in late July.

This surprisingly obscure piece of U.S. history will have its 120th anniversary this year, and you can celebrate it May 6 at the Buffalo Soldiers & Bicycles event, part of the 15th Annual Mary Meachum Celebration organized by Great Rivers Greenway.

Organizers hope the event will bring attention to a remarkable journey, one that is largely forgotten today despite being commemorated in books and songs, including Otis Taylor's “9th Cavalry Blues."

"I'm a lifelong St. Louisan and I'd never heard this story," says Anne Milford, communication coordinator for Great Rivers Greenway. "We hope that this event will shine a spotlight on this really epic journey these soldiers took."


According to historians, black soldiers like those of the 25th were often stationed in remote outposts like Missoula, far away from white people who might be “afraid of well-trained and armed black men.” They were given experimental, often dodgy equipment and used to test the bicycles because, in Taylor's words, “their lives had no value.”

Oh, how they proved their critics wrong.

With bicycles weighing almost 60 pounds fully loaded — 35 of which were their steel frames — the soldiers travelled along the Northern Pacific Railroad until they reached Billings, Montana. From there, they followed the Burlington Northern Railroad through Wyoming, South Dakota, Nebraska and Missouri until they reached St. Louis.

Although their bicycles were state-of-the-art (for 1897), they used ineffective "spoon brakes," which pressed on the tires themselves instead of rims, and the stiff steel frame made an already bumpy ride hell on wheels. In his post-journey report, the regiment’s leader, Lt. James Moss reportedly recommended the army add “shock absorbers to prevent jarring, as many men had suffered numbing pain from traveling over rough roads and railroad tracks.”

Extreme conditions meant heat exhaustion, sickness, and constant repairs. Their trip across the Continental Divide early in the trek brought with it snow—in June. Of the 1,900 miles, 400 were covered on foot, with bikes pushed. When the Buffalo Soldiers reached St. Louis on July 24th, they were greeted in Forest Park by a crowd of more than 10,000.

Moss wrote in a diary entry: “We endured every possible condition of warfare but being shot at.”

The Spanish-American War began the next year, which sadly meant the Army Bicycle Corps program was shelved permanently, despite the soldiers’ historic achievement. The soldiers of the 25th were eventually sent to fight in Cuba alongside Theodore Roosevelt's Rough Riders. Even so, their incredible story is recognized and celebrated today with events like the one on May 6.

The free event, which lasts from noon to 5 p.m., will take place at the Mary Meachum Freedom Crossing (4500 E. Prairie Ave), Missouri's only Underground Railroad site. Beginning at noon, live entertainment and other activities to commemorate the journey. Historical re-enactments will follow at 1:30 p.m. and 3:15 p.m., and the event will end with a sunset flag ceremony and a barn dance.

"We're doing a bike ride and we're going to have some re-enactors performing vignettes," Milford says. "They'll be in costume, walking throughout the crowd and up on stage. It's a really fun event because it's very casual, you're not just sitting in chairs."

Although the real route can’t be traversed in one afternoon, you can still get your cycle on: The event will be preceded at 10 a.m. by a ten-mile roundtrip historical bike ride along St. Louis city streets, and trail walks from 11 a.m. to 1 p.m.

"It's not only the story behind the Mary Meachum site, but this amazing story in 1897," Milford says. "It's a great opportunity for people to get outside and see parts of the river they've never seen before and hear history they'd never learned about before."

More information about the anniversary event is available online.