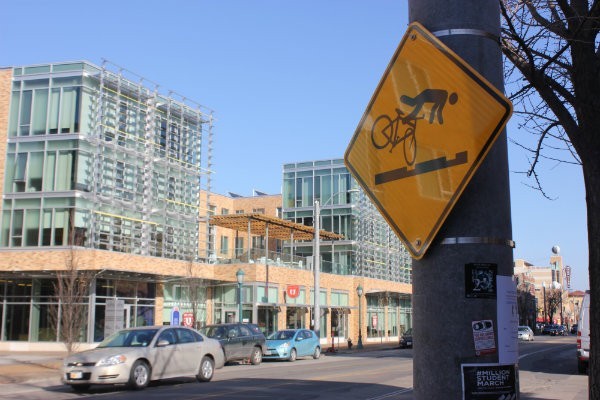 University City is considering a plan that would ban bicycles from the Delmar Loop — saying that the dangers posed by the trolley are simply too great for cyclists.

Sinan Alpasan, the director of public works and parks for the municipality, tells Riverfront Times that the matter was first raised by the citizen-led Traffic Commission, which advises the University City Council on matters related to its roadways. The commission seems to have a consensus in favor of the ban, one that he says he shares.

"It's hard for a bicyclist to know when their bicycle is going to cross the tracks at any given point," he says. "Keeping an eye on that track in the ground is not always possible." But because bicycle tires can easily get pulled into the track, serious injury is a very real possibility, he acknowledges. (And, yeah, it's already happening.)

"I don't think it's viable to have bicycles, vehicles, pedestrians and the trolley all in that narrow stretch of roadway," Alpasan says. And with an alternate route that runs on Enright, parallel to the street, he believes a ban could keep everyone safe.

The University City Council has already had its first reading on two ordinances suggested by the Traffic Commission relating to the trolley: One saying that vehicles may not pass a trolley car, and another saying that they cannot obstruct the trolley tracks. Those could pass as early as May 8, Alpasan says.

A bicycle ban, however, could prove more controversial.

Brent Hugh, executive director of the Missouri Bicycle/Pedestrian Federation, was not aware of the possibility of a ban until hearing from the Riverfront Times. But he says he would be staunchly opposed. A ban, he says, "is a completely backwards way to deal with this."

Hugh acknowledges that the risks posed to cyclists by the trolley tracks are real — one reason Big Shark Bicycles pulled out the Loop last year. For the last two decades, Hugh says, one of the federation's main objectives has been to remove objects from Missouri streets that are dangerous to bicycles. Of the Loop trolley and the newly installed streetcar line in Kansas City, Hugh says, "These two projects have installed more dangerous objects right smack in the middle of the street than we've removed in twenty years!"

Still, now that the tracks are here, Hugh says, education is key — letting cyclists know about both alternate routes and the dangers of the tracks. And for future phases of the track, he believes cyclists' concerns need to be dealt with more smartly.

"I've biked all over San Francisco, and they have tracks everywhere," he says. "There's not even one block that's as bad for cyclists as a single block of the Loop trolley."

To mitigate the design problems of a track that weaves through already narrow streets, Hugh says, trolley planners should consider passenger exits in the center of the street, not its shoulder. And engineers should also look into rubber or compressible inserts that have been shown to work elsewhere. "They should not lay another 100 feet of track down without addressing this situation," he says.

In Europe, Hugh notes, trolley lines are now constructed in a way that isn't dangerous to bicycles. But since such tracks aren't made in the U.S., federally funded projects like the Loop trolley tend to avoid them.

Still, Hugh says the last thing the city should want to do is start ticketing cyclists in an area that's always thrived on bicycle traffic. "It would be like if Branson established itself as a spot for live shows — and then started to close all the theaters because the traffic was too bothersome!"

The ban is far from a done deal, even if it has found support among Traffic Commission members and at City Hall. The University City Traffic Commission has referred the matter to the Loop Trolley Transportation District for its opinion, Alpasan says.

If district members agree, the Traffic Commission will again consider the measure, likely on May 10. After that, Alpasan says, it would need to go to City Council for its vote, in hopes of having the matter resolved before trolley cars come online for real this summer.