St. Louis Blues Twitter Is Not Here for Your Racist Jokes 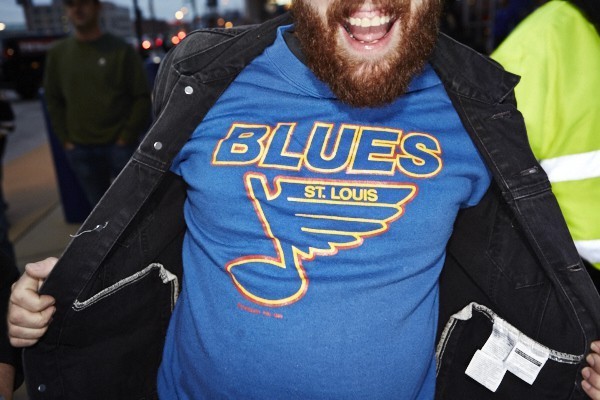 In the midst of a playoff run to the Stanley Cup, the St. Louis Blues social media team is elevating the sportsmanship of its own fanbase through the time-honored traditional of a public Twitter smackdown.

Last night, as the Nashville Predators’ otherworldly defenseman P.K. Subban was carving up the Blues on the way to a 4-3 victory, a Blues fan named Ryan Dix, tweeting under the handle @LordDixick, took a jab at Subban's race. 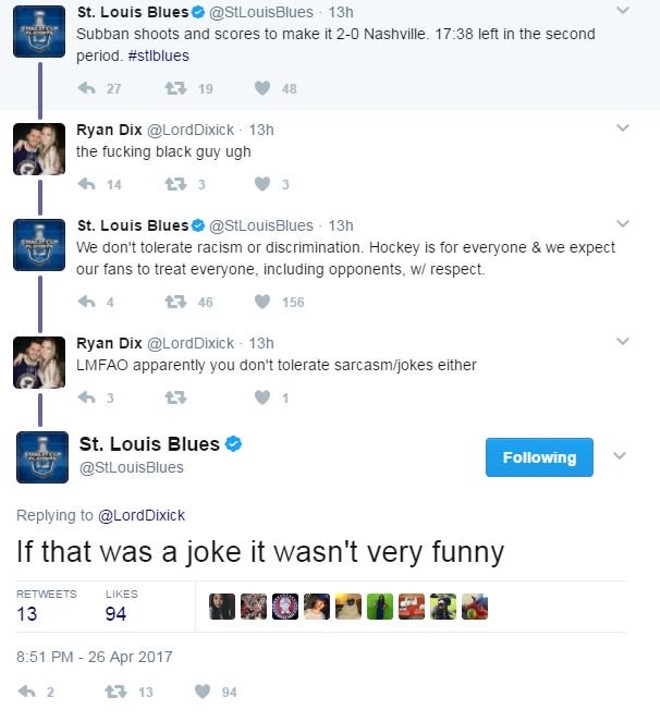 A rarity in hockey, Subban is black. And this isn't the first time his race has been dragged into the Twitterverse by a thin-skinned sports fan who just can't handle his dominance. In 2014, Subban was targeted with blatantly racist tweets by Boston Bruins fans. At the time, in comments to ESPN, Subban suggested that the overwhelming negative response to the racism demonstrated the strength and diversity of the league.

Blues fans might agree. The team's response was hailed by many on Twitter as a clear-cut example a professional team acting, well, professionally and decently.

@StLouisBlues @LordDixick THANK YOU @StLouisBlues for speaking out against that racist remark. No place in hockey, or civil society, for that BS.

@StLouisBlues @LordDixick From a Preds fan, thank you Blues, class move on your part

@StLouisBlues @LordDixick Much respect to the #stlblues hockey club from a #Preds fan. Class act all the way around last night. Onward to game 2! #NSHvSTL

@StLouisBlues @LordDixick The #Blues say... Not happening in our house! Kudos!

And as for Ryan Dix? Naturally, he's since his made his Twitter account private. However! We managed to grab a screenshot of Dix's last Blues-related tweet, in which he offered an unreserved apology that's both thoughtful and an eloquent reflection on sports fando — wait, no, just kidding, he's still an asshole. 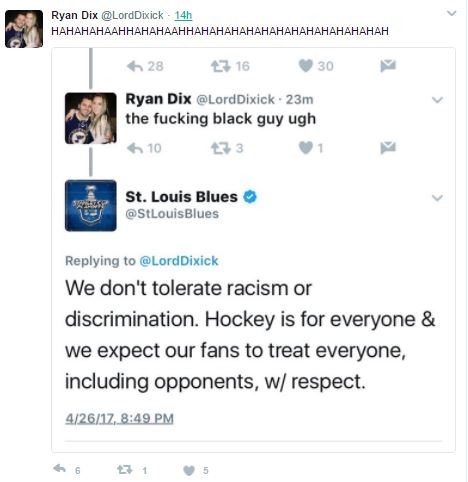