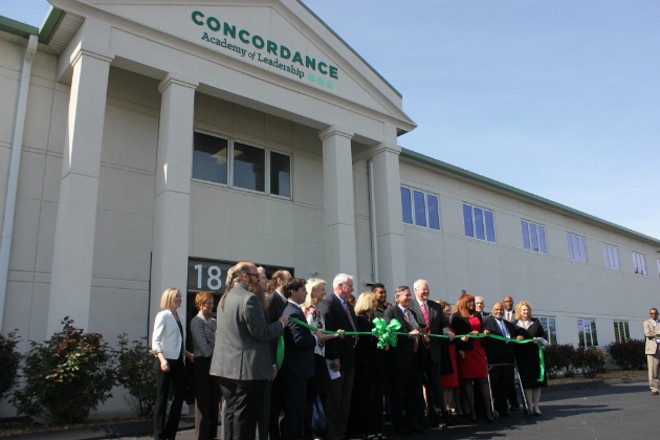 After more than a decade in prison for robbery, Aaron Adams spent about a week on the outside before he was locked up again.

The 39-year-old says he quarreled with his probation officer and picked up another year. He says he didn't have a clear plan for life after prison back then.

It was completely different when he got another chance last December. Adams was part of the first class of inmates — now former inmates — to enroll in St. Louis-based Concordance Academy of Leadership. The brainchild of a retired Wells Fargo CEO, the nonprofit begins working with prisoners six months before their release and offers a comprehensive slate of services, including career training and mental health care, for their first year of freedom.

Adams says the program has helped him avoid past mistakes and pitfalls that lead ex-cons to re-offend. He now works for Concordance as a live-in house manager at the program's residential facility and plans to eventually become a licensed barber. He hopes to own his own shop some day.

"I was just afforded a good opportunity, and I'm taking advantage of it," he says. 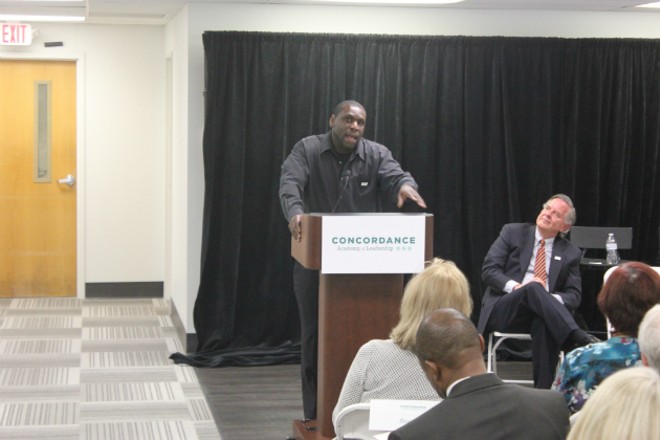 Concordance is a new, highly publicized approach to solving the problem of recidivism. On Tuesday, it celebrated the grand opening of its headquarters in Maryland Heights. The 31,000-square-foot facility in an industrial park near I-270 is freshly renovated with attractive glass-walled offices and meeting space on the first floor. A second floor is still under construction.

The idea is to provide a one-stop shop for former inmates, instead of bouncing them across the city and county for services. Rather than going one place for housing assistance, another for job training and another for legal help, participants can find nearly everything they need within one organization — most of it under one roof.

The methods are backed by research, the organization says, but the results are still coming in. Danny Ludeman, who has spearheaded the project after retiring from Wells Fargo, says early indications show they're going in the right direction. All fourteen men in the initial class, which began last May, have either landed jobs or are reviewing job offers.

"I've never been involved in anything in my entire life that is more fulfilling than doing this work," Ludeman says.

Chris Sommers, co-owner of Pi Pizzeria, has hired two workers from Concordance. He encouraged other business owners to follow his lead.

"We've got a couple of the hardest-working and most grateful employees in town," he says.

St. Louis Mayor Lyda Krewson says she had agreed as an alderwoman to help Concordance as it considered a space in her Central West End ward before it found its new home in Maryland Heights. She remains a supporter.

Concordance hopes to grow to help 250 former inmates every year, and then 1,000. The organization expects to open another office in Kansas City, before expanding into four states with an ultimate goal of going nationwide.

"It'll have a huge economic stimulus by employing one of the most unemployable populations in the country," Ludeman says.

The key will be whether the program can produce. The St. Louis Post-Dispatch reported last month that a second prong of the original Concordance vision, a research partnership with Washington University to evaluate the progress, has dissolved. And the remaining program is not cheap — with a cost of $15,000 to $20,000 per participant.

Concordance has raised about $15 million, Ludeman says. The city and county of St. Louis along with St. Charles County chipped in $2 million. But the long-term goal is to show enough success to sign a pay-for-performance contract with the corrections system, a goal that becomes tricky when considering the easy populism of rejecting services for ex-criminals.

Former Missouri Senator Jeff Smith, whose legislative career was cut short by a federal conviction, is now executive vice president of community engagement and public policy for Concordance. He says the organization has to make the economic case for funding the program. It's a whole lot cheaper to follow the Concordance model to redirect ex-cons, about 77 percent of whom return to prison in three to five years, than it is to build another prison, he says.

Drawing inspiration from a quote made by Winston Churchill, he says, "This is the most costly way of working with formerly incarcerated people, except for everything else we've tried."