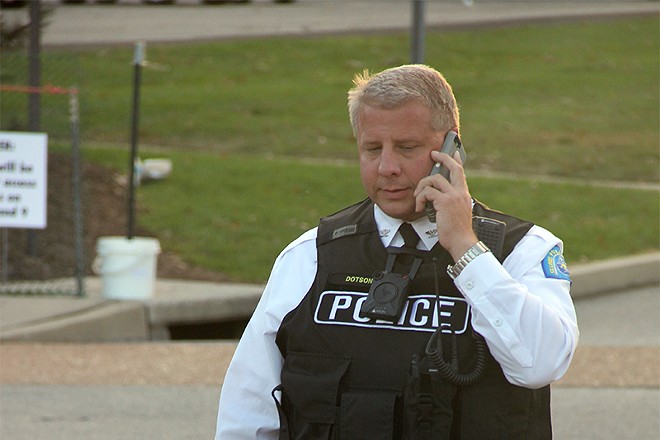 And just like that, St. Louis is searching for a new police chief.

Less than 48 hours into her tenure, Mayor Lyda Krewson announced this afternoon that 47-year-old Chief Sam Dotson is retiring.

"The chief and I had a chance to talk about the future of the department, and he made the decision to retire," Krewson said in a statement after a Wednesday morning meeting with the chief. "I am grateful to Chief Dotson for his service and commitment to the people of the City of St. Louis."

Dotson, a 23-year veteran of the police force, will stay on as a consultant to the department, according to a press release — but even that time is limited to one year.

Police chief is always a tenuous job, but a Krewson administration had at one time seemed like the safest harbor for the Dotson during the chaotic mayoral campaign. Former Alderman Antonio French had made firing Dotson one of his first-day tasks if he was elected; City Treasurer Tishaura Jones had also said she would see to his termination.

Dotson was briefly a candidate for mayor, but quickly pulled out after sharp opposition from outgoing Mayor Francis Slay. Slay had previously been seen as one of Dotson's strongest supporters. Dotson had even worked as his director of operations for twenty months, on loan from the police department, before becoming chief.

Krewson has promoted Assistant Police Chief Larry O'Toole as acting police chief as the city begins the search for a new chief and director of public safety.

We have reached out to Dotson for comment and will update the story if we hear back. (Edit: The police department released a statement from Dotson. It's posted in full below.)


This morning I met with our City's new Mayor to discuss the future of our City and the Police Department.

The conversation was good and during that conversation I offered to retire and remain involved as a consultant with the City of St. Louis to accomplish two things. First, to support our City and second to allow the new Mayor to begin to establish her own team.

I am optimistic and hopeful about the future of our City and our Police Department.

As I transition to my new role, I have the utmost respect for all of those who wear the badge and the uniform. It was my honor and pleasure to have led the St. Louis Metropolitan Police Department for over four years and to have worn the uniform for 22 years.