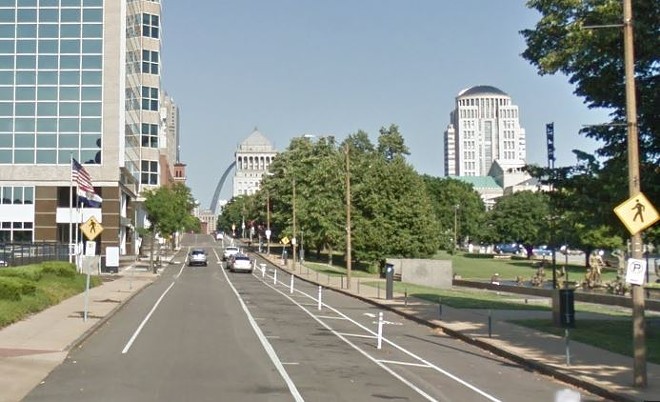 It's been months since the last real snowfall hit St. Louis, but a city traffic engineer says snowplows are to blame for the absence of protective bollards that had previously been installed on several bike lanes in the city.

Erected in 2015 as part of a years-long effort to expand and improve the city's bike lanes, the bollards on Chestnut Street between 20th Street and North Broadway downtown (as well as portions of Oakland Avenue and Union Boulevard) provide an ideal barrier between car traffic and the bodies of pedallers who would prefer not to be sideswiped.

Yet when winter rolls around, the bollards are unscrewed and removed to make room for the city's snowplows. And even though temps have been in the 70s, they have to make a return.

Jamie Wilson, the city's Bicycle and Pedestrian Coordinator, acknowledges that removing and replacing the bollards represents an expensive hassle. But the city doesn't have a choice.

"We don’t have plows that are narrow enough to get inside the bike lanes," Wilson says, adding, "It’s really not desirable to go out every year and take them up and down. It's not something, from a labor perspective, that we really look forward to ourselves."

The lack of protective bollards isn't desirable for city cyclists, either. Their absence was first noted by NextSTL's Alex Inhen, who had praised the protective buffer after the bollards were first installed two years ago.


But even if the removal is necessary, it's worth questioning why it's taking so long to get them back up. Even with our capricious Midwestern weather, the possibility of snowfall — and the need for snowplows — is far lower than even the Cardinal's current winning percentage.

Wilson says road crews have already replaced some of the bollards, and he expects the others to be fully restored in within the next two weeks. But until the city can provide a properly-sized snowplow to navigate the narrower bike lane, he cautions that the practice will likely continue.

"As you’re going to see bollards all over the city of St. Louis as we upgrade and continue to maintain our bike lanes, we’re going to have to find a way to have a piece of equipment that runs up and down it," says Wilson. "Because, quickly we’re going to out-labor ourselves."