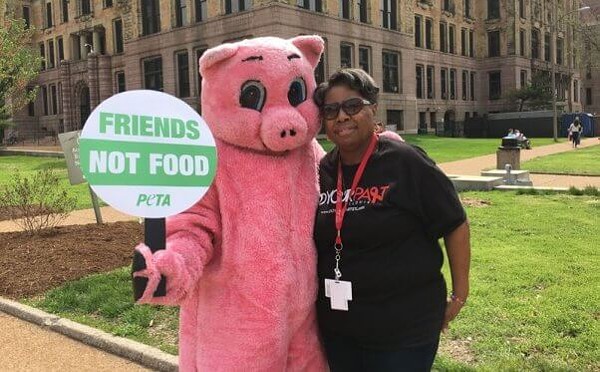 Instead of a ham this Sunday, why not commemorate the resurrection of Christ with a … vegan roast?

St. Louis was recently dubbed the "Best City to Celebrate Easter," and that dubious distinction was apparently enough to draw a visit from the publicity seekers at PETA. They showed up downtown on Friday to make sure diners knew the ethically responsible way to celebrate: with free vegan sandwiches, served by a giant costumed pig.

“PETA’s ‘pig’ is here to encourage diners to choose merciful meals this Easter Sunday,” says PETA Vice President of Communications, Colleen O’Brien, in a release. “A hearty vegan roast is a delicious and compassionate way to celebrate the holiday, while sparing sensitive pigs immense suffering.”

The pig was spotted along Market and North 13th streets around noon, carrying signs that read "Friends, Not Food," and "It’s a Good Friday to Go Vegan."

PETA’s food giveaway may have been popular in the midday sunshine, but it’s unclear if it left their committee to convert Maya Angelou's house short-handed.

Regardless of whether your Easter menu is all-vegan or not, the jury is still out on whether chocolate eggs and bunnies were present for the first observance of Easter. We can safely assume they didn’t have Tofurky.