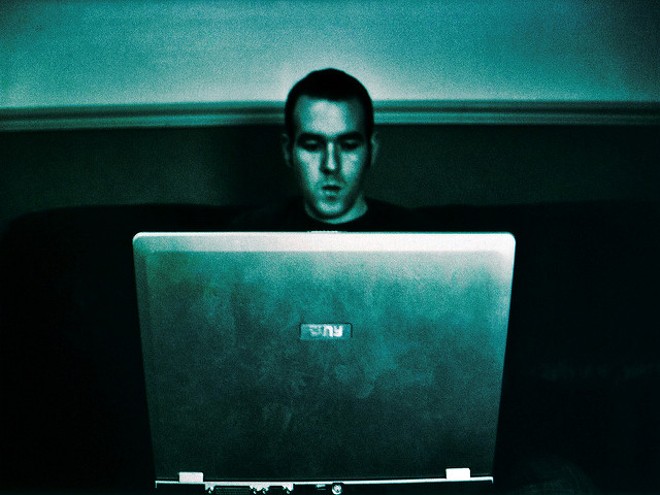 You'd think that a man who once attempted to legally marry his own laptop would have a more accepting view of internet pornography.

In 2014 Mark Sevier, a former Tennessee attorney and current producer of Christian electronic dance music, attempted to intervene in a lawsuit regarding same-sex marriage in Florida, saying that if gay couples "have the right to marry their object of sexual desire, even if they lack corresponding sexual parts, then I should have the right to marry my preferred sexual object." Which, in this case, happened to be a 2011 model Macbook.

It was a cynical and ultimately doomed motion, and it was (predictably) dismissed. "Perhaps the motion is satirical. Or perhaps it is only removed from reality. Either way, the motion has no place in this lawsuit," the judge wrote in his ruling.

That didn't stop Sevier from trying again. In 2016 he filed a federal lawsuit in Texas with the same goal. It, too, was batted down. Texas Attorney General Ken Paxton argued that "the right to marry one's computer is not an interest, objectively, deeply rooted in the nation's history and tradition such that it qualifies as a protected interest." Obviously.

And yet, Sevier, now 40, says he currently has the ear of lawmakers in more than a dozen states thanks to his work to advance the deceptively named Human Trafficking Prevention Act.

“It’s a vicious cycle. [Exposure to pornography] proliferates so many bad things,” Sevier says in an interview with the Daily Beast. “We’re definitely not anti-sex. Sex is good. God made it. But when humans are getting off to child pornography images, it doesn’t promote human flourishing.”

The bill defines pornography — all pornography, not just child pornography — as a "public health crisis" and seeks to require that a filter preventing its access be applied to all devices that can get on the internet, from cellphones to laptops to routers to tablets. Manufacturers of these devices would also be required to set up round-the-clock call centers to field complaints and concerns in regard to so-called obscene material.

But what if you like watching naked adults do naked things on your devices? Oh, simple: Just pay $20 each, and the filter is gone!

Sure, it seems like a shameless governmental cash-grab disguised as a public safety measure and pushed by a bigoted madman, but....uh....

Huh. It really seemed like there was going to be a second half to that sentence.

"The notion that you have to jump through some hoops as an adult to access free information on the internet violates the First Amendment," Randall Marshall, legal director for the ACLU of Alabama, tells AL.com. "This is censorship, plain and simple."

That's onerous, to be sure. So should Missouri be worried?

Sevier claims to be working with Missouri lawmakers to advance the bill here — but there doesn't appear to be any concrete evidence to back that up.

On Sevier's website listing state legislators who've introduced versions of his bill, Representative Nathan Beard (R-Sedalia) is pictured under the section marked "Missouri." A link to Beard's profile on the Missouri House of Representatives' site is included as well.

Curiously, though, a link marked "First Draft of Legislation" directs to a document that lists Representative Elijah Haahr (R-Springfield) as its author — not Beard. That draft also claims to have been filed in the Senate, which doesn't make sense since Haahr is a state representative — not a senator.

In an email with RFT, Haahr flatly denies having anything to do with the document.

"Not my bill. Never filed it. Never signed my name to it," Haahr writes. "I get a lot of emails about human trafficking. I don't believe I spoke with this person and certainly did not agree to sponsor this."

Now, normally we'd be the last people to give the Missouri legislature the benefit of the doubt, but our best guess in this case is that Sevier got ahead of himself — and that he has not yet found anyone in Missouri who's a big enough dope to carry his water. (Seriously, did no one give him the name of Mike Moon?)

Indeed, anyone doing a little background research on Sevier is likely to find quite a few red flags. In addition to attempting to wed an electronic device on no less than two separate occasions, Sevier was also barred from practicing law in December 2011 by the Tennessee Supreme Court's board of professional responsibility for mental disability and disciplinary misconduct — including remarks he made comparing country music star John Rich to Adolf Hitler. (Sevier was later convicted in 2015 for stalking and harassing Rich, as well as a separate case of harassment involving a seventeen-year-old Ben & Jerry's employee.)

The board's complaint also made note of an altercation in 2010 in Houston, Texas, in which Sevier tried to abduct his own seven-month-old son during a supervised visit with the boy's maternal grandparents. A fight ensued at the McDonald's where the visit was held when the in-laws refused to allow Sevier to take the child, and Sevier reportedly attacked his father-in-law. The infant was injured in the altercation and was treated at an emergency room for a knot on his forehead. Sevier was ultimately found guilty of misdemeanor assault and sentenced to 58 days in a Texas jail.

Sevier has called the incident a "fake assault case" and accused the courts of "railroading" him.

According to the Daily Beast, Sevier presently has a warrant out for his arrest in the state of Tennessee, charged with criminal contempt for failing to pay child support and for continuing to contact his ex-wife in spite of a restraining order. So much for family values.

For his part, Maass has made it his business to educate those lawmakers who are actually sponsoring the bill — as opposed to the ones deceptively listed on its website — about its negative effects, as well as Sevier's questionable past antics.

“Nobody has been aware of this when I talked to them.”

And even if he was, it's probably already pretty crowded in there with him and his computer.