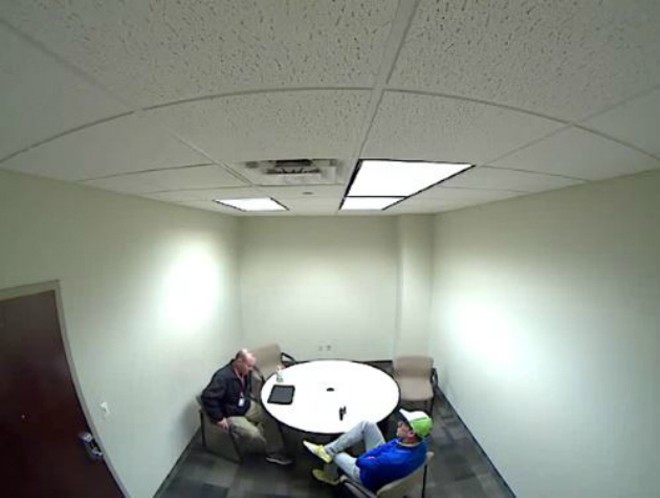 A young Maplewood man who police say was kidnapped and tortured for days is a "punk" who "would have got it sooner or later," St. Louis entrepreneur Todd Beckman told police.

Beckman, the founder of TanCo tanning salons and the MassageLuXe chain, is one of five men charged with kidnapping and assault in the case. Authorities claim he helped orchestrate a vicious attack sparked by a drug debt.

Two brothers, one whom Beckman describes as a protege, snatched the man from his house in Maplewood and held him for three days in November, beating him and shocking him with a Taser, before Beckman collected a $27,000 ransom from the man's parents, according to authorities.

Beckman was arrested in early December at his bachelor pad in Fenton. Once in custody, he spoke to investigators for more than three hours. They recorded the whole thing, and Riverfront Times obtained a copy of the recording on Monday after a judge ruled it was public record.

In the recorded interview, Beckman at first claimed that he did not know anything about the victim, kidnapping or the beatings. He and investigators bantered easily in the beginning, chatting about the cold weather, go-karts and his rise in the business world.

But it didn't take long for him to fold as Maplewood Detective Sergeant John LeClerc and Detective David Brown grilled him.

"There's a lot more to this story," Brown said as the questions suddenly became more pointed

Eventually, Beckman laid out a tale of twenty-something drug dealers who were fighting over a drug debt.

"All I was doing was trying to keep people from getting hurt," he claimed.

As Beckman told it, the trouble began when the Maplewood man stole from 24-year-old Blake Laubinger of Pacific. The man and Laubinger had been friends and partners in a pot-selling business before suffering a falling out, the tanning mogul told detectives.

When Laubinger returned home to find his house burglarized, drugs and a pile of cash missing, mutual friends and fellow dealers identified the Maplewood man as the culprit, Beckman told cops.

Laubinger reportedly spent weeks searching for the man before he and his brother, Caleb, allegedly ambushed the man at his home. The two are accused of beating the man before binding his hands and hauling him to Blake Laubinger's home in Pacific.

Beckman initially told authorities he knew nothing about those actions, but later admitted he visited the house and saw the man tied to a pole in the basement. Beckman told investigators that he spoke to the man's dad on the phone, hoping to work out a resolution "dad to dad."  That involved a convoluted plan to transfer the man's car to Beckman, who would then sell it and give the money to Blake Laubinger.

But the deal failed, and Beckman admitted to investigators that he later collected cash from the man's parents and deposited it in his office safe. Authorities say Beckman, 52, also threatened to kill the kidnapping victim, even buying a heat gun and shrink wrap as a way to advance the terror.

Beckman has denied all the charges. Even as the detectives pointed out inconsistencies in his stories, he portrayed himself and a guy with good intentions who just happened to end up in a mess.

"I'm the nicest freaking guy you'll ever meet," he says at one point.

He claims the Maplewood man is just trying to take down Laubinger as a way to cover his own culpability in the burglary.

Beckman's attorney, Travis Noble, has tried to prevent his client's statements from being used in case, arguing that investigators let Beckman get drunk while in custody. Law enforcement officers say the entrepreneur did swig some vodka while they were searching his office, but that was after the interview. They say they stopped him as soon as they realized what he was doing.