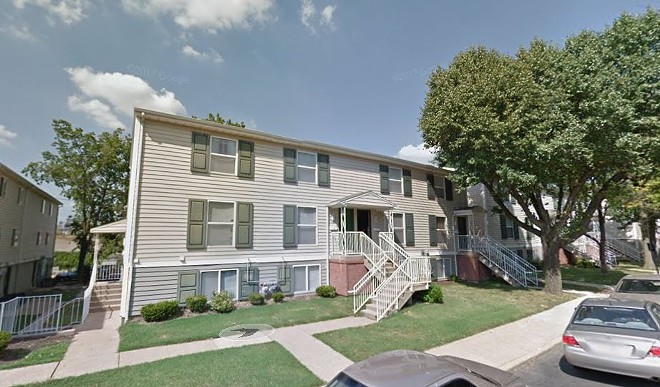 There's absolutely no reason to think Aaron Malin would be willing to help a property management company evict its low income tenants for drugs.

That's because even the most basic Google search would immediately identify the Missouri native as an activist intent on reforming, not enforcing, the state's drug laws. Now a 24-year-old law student in Colorado, Malin played a visible role in the movement to free Jeff Mizanskey from a life sentence for pot. And more recently, Malin attracted news coverage for his campaign to force Missouri's secretive drug task forces to follow open records laws.

And yet, last week, an asset manager for a Missouri-based affordable housing company with extensive St. Louis holdings contacted Malin with a bizarre request: Would he be interested in training the company's employees to conduct drug inspections?

Malin, of course, said no. But not before he asked a few questions. Then he shared the correspondence with Riverfront Times — correspondence in which, under Malin's expert questioning, the housing company acknowledged working aggressively to catch low income tenants using drugs.

According to two St. Louis attorneys consulted by the RFT, the policies the housing manager described to Malin aren't just callous, but possibly illegal — "objectionable on every level," in the words of one.

Malin, too, finds it deeply troubling.

The company is "ostensibly trying to help people, which is commendable," Malin tells RFT. But, he adds, "I'm concerned for the well-being of the people who actually live in those units."

It was 5:47 a.m. last Thursday when Malin received an email from Joy Scharnhorst, an asset manager for Fulson Housing Group. Founded in 2003, the company touts affordable housing as its "key mission," while boasting properties that span "more than 1,000 units and in excess of $100 million of development in 10 communities throughout the state of Missouri." Those developments include hundreds of units in the St. Louis area.

"Hi Arron," Scharnhorst's email began, misspelling Malin's first name. The message continued: "I am hosting a training conference with around 15 people throughout our Property Management. In our business we evict tenants for drugs among other things. I was hoping you knew how or who I could contact about having someone come to our conference and train the managers on what to look for when they are in the apartments doing inspections. The training is the end of April at the Lake of the Ozark."

While Malin knew he wasn't interested in helping, he also realized he wanted to know more. He replied with questions, and Scharnhorst obliged. She asked if Malin could teach a class on "how to detect any types of drugs, the chemicals that are used to produce drugs, the smell of marijuana."

Malin then gradually teased out details on the housing group's inspection policies. In a subsequent email, Scharnhorst explained that the company's landlords conduct inspections on a quarterly, and sometimes even monthly basis, with just 24-hour notice. That didn't sound right to Malin.

"Are you sure your company is compliant with Missouri landlord-tenant law?" he wrote. He questioned whether the inspections violated the regulations for low-income properties funded by federal government.

Scharnhorst didn't seem to pick up on Malin's squeamishness. In fact, in her final email, she asked Malin if he knew another drug expert who could conduct the training session, and if he could pass along a referral.

"Yes, I do, but I’m morally opposed to doing so," he responded. "If someone is suffering from a substance use disorder, the last thing they need is to also be made homeless. I cannot, in good conscience, help your group learn techniques and strategies that will be used to make life harder for people suffering from drug addiction."

Camp says he was shocked by the disclosures in Scharnhorst's emails to Malin. He believes a blanket inspection policy would violate, at the very least, "the spirit" of subsidized housing programs.

Those programs, ranging from tax credits to subsidies administered through the U.S. Housing and Urban Development Department, or HUD, are intended to place vulnerable individuals into stable living situations.

Depending on how Fulson Housing Group is operating, Camp says, there may not be anything technically illegal here. Still, he is concerned about what the email exchange describes.

"If a landlord has reasonable suspicion, HUD is going to give them some autonomy," Camp says. "But is reasonable suspicion giving 24-hour notice every month, to run into every single apartment in a complex? Not to me, that’s in no way reasonable. It seems totally arbitrary, which could potentially give someone a legal hook to battle this."

Brendan Roediger, an associate professor at Saint Louis University School of Law, also reviewed the email correspondence between Malin and Scharnhorst. He notes that while the law does permit landlords to make inspections, such checks are meant to address a unit's habitability or structural integrity. That's not what Fulson Housing Group appears to be doing here.

"If their actual rationale is to spy on people, I think that’s certainly that’s not allowed," Roediger says. And the fact that the landlords are essentially pretending to be police investigators — while attempting to enlist civilians like Malin to instruct their tactics — poses even deeper problems.

"If they’re evicting based on the fact that they think they can detect the scents of drug precursor and those sorts of things, in my mind that would definitely be illegal," he says. For Roediger, that kind of guesswork wouldn't meet the federal government's eviction standards, which require actual evidence of unlawful activity.

"I’d be willing to argue that this is an unlawful practice just based on what I saw in the email," he says. "From a moral and ethical standpoint, it’s objectionable on every level."