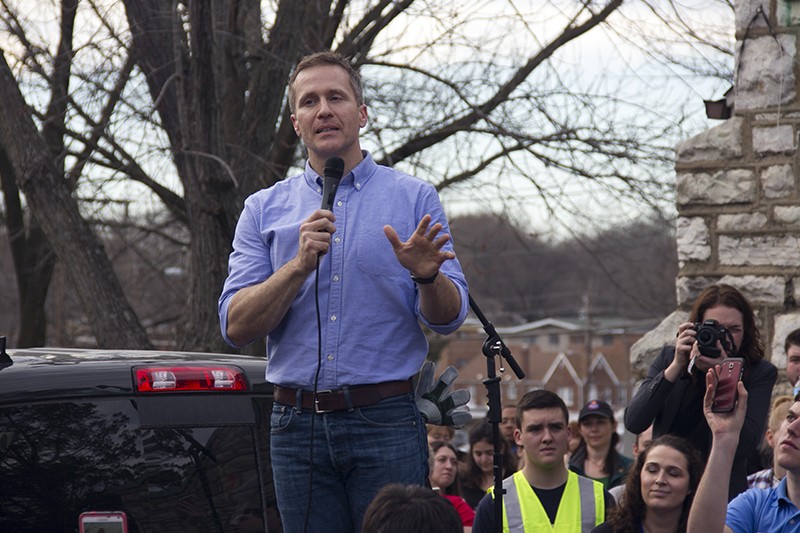 In the run up to his successful election as governor, Eric Greitens did pretty much everything he could to boost his conservative bonafides. He rubbed shoulders with Trump. He pew-pew-pewed some guns on TV. But now that the dust has settled, abortion rights activists are hoping he'll investigate whether the state should continue shuffling millions of dollars of state tax credits and federal funds to "crisis pregnancy centers" like Thrive St. Louis.

"Our concern is about the marriage between a lack of regulation and what these organizations are doing," says Pamela Merritt, co-director of Reproaction. The activist group, which is holding a "visibility event" outside Thrive's St. Louis offices at 10 am today, has launched Facebook ads, a mobile billboard and a petition to grab the governor's attention.

At issue is the roughly $3 million the state earmarked for 2017 to fund the state's Alternatives to Abortion Services Program, which provides financial support (and tax credits) to Thrive and 68 other centers. In addition, the state also bolsters the centers' operations with federal welfare funding known as Temporary Assistance for Needy Families, or TANF.

Granted, states are allowed to choose how to distribute their TANF funds, but over the past five years or so Missouri has shrunk its welfare rolls from more than 100,000 in 2011 to just 37,000 in 2016, according to a report by the St. Louis Post-Dispatch. That means leftover federal money — and the 2017 budget calls for about $4 million to fund groups like Thrive.

As we've previously reported, Thrive also operates in area schools, offering an outsourced option for sex education courses, but the program's lack of transparency sparked a recent uprising of concerned parents, resulting in several schools booting Thrive from the classroom.

For Merritt and other abortion rights activists, sending money intended for needy women and children to organizations known to disseminate medically inaccurate information — such as debunked claims linking abortion to breast cancer — should trouble anyone claiming to to be pro-life.

"He is new to politics," Merritt says of Greitens, "and the anti-abortion movement in Missouri is very powerful. But you cannot profess to be pro-life in any real sense of the word if you are taking food from hungry kids."

Today's Reproaction campaign event follows what has already been a wild week for reproductive rights in Missouri. On Tuesday, a federal judge indicated his intent to block two laws that effectively restrict the state's abortion services to a single Planned Parenthood clinic in St. Louis' Central West End neighborhood.

And on the other end of the spectrum, State Senator Bob Onder, (R-Lake Saint Louis) is attracting Akin-levels of national ridicule for pushing an amendment that would rename St. Louis' top-ranked zoo "The Midwest Abortion Sanctuary City Zoological Park.”