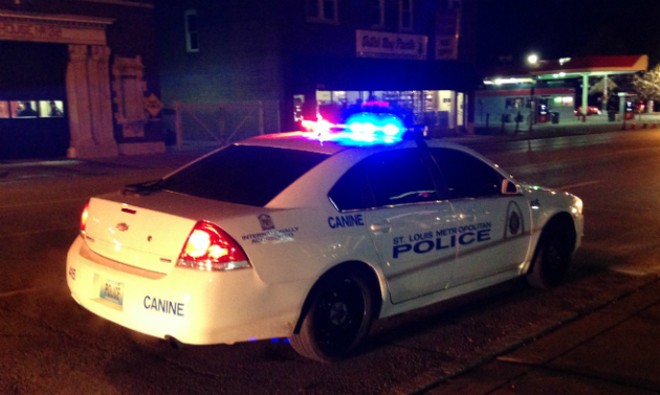 An internal affairs investigator spent a month tracking the four, even secretly watching at least one of the officers at home, according to court documents. The investigation revealed the officers were not logging the unusually large number of overtime hours described on their time cards, authorities say.

Police Chief Sam Dotson described the alleged time card fiction as "a betrayal to both the community and the men and women of this department who work to uphold our core values," adding that it would not be tolerated.

"The warrants issued today demonstrates the commitment of both the Circuit Attorney’s Office and our department to seek justice in this case,” Dotson said in a statement.

The officers were identified as Daniel O'Brien, 33, of Ballwin; Michael Langsdorf, 37, of Arnold; Brian Jost, 39, of Arnold and Emin Talic, 25, of Arnold.

At least three of the officers — Jost, Talic and Langsdorf — were part of a Drug Enforcement Administration task force that has worked cases throughout the St. Louis Metro area. Police and a spokeswoman for the Circuit Attorney declined talk about that aspect of the case.

It was not immediately clear whether O'Brien was also a task force officer. He's accused of stealing the least — $300 — through time card forgery, according to court documents.

Jost was the most prolific, authorities say. An internal affairs investigator who spent time tailing the nearly eighteen-year veteran noted more than fifteen times Jost claimed to be working overtime but was not, according to court documents. The cost to taxpayers was more than $3,300 in ill-gotten pay, authorities say.

"Law enforcement officers in this country are granted a tremendous amount of power to help keep our community safe and uphold the law," Circuit Attorney Kim Gardner said in a statement, adding, "I hope these charges today send a clear message that those who choose violate the public’s trust will be held accountable to the fullest extent of the law."

Gardner applauded Dotson and the department's internal affairs division for their work on the case.

All of the officers were suspended last month. None of them had been taken into custody as of Thursday afternoon. Police promised to release booking photos once they're in custody.

The maximum punishment for the top charges is seven years in prison and fines of $5,000.