As election night dragged on, the once-boisterous crowd of soccer supporters in the Union Station Hotel's Regency Ballroom began to grow quiet, their excitement replaced by the sullen resignation of sports fans watching their team lose the biggest game of the season. Only, in this case, it wasn't just a game.

It was nearly 11 p.m. when the final results came in and it was clear that Prop 2, which would have earmarked $50 million in new business use tax revenue for a Major League Soccer stadium, had lost. The election returns left no room for a last-second comeback. Despite months of campaigning and more than $1 million in mailers and TV spots, St. Louis voters had rejected a bid to commit public funds to the downtown stadium.

The DJ cut the music, and the ballroom's two massive projection screens, which up to this point had displayed a stream of supportive tweets hashtagged #MLS2STL, suddenly went dark. Jim Kavanaugh and the other three main investors behind stadium plan trudged onto the stage and faced the dejected volunteers and supporters. It was over.

"You should be very proud of everything that you’ve done; I can tell you I am," Kavanaugh began. Nearly six months ago, the CEO of Maryland Heights-based World Wide Technology had announced the plan to build a $200 million stadium that would virtually guarantee the city landing one of MLS' coveted expansion teams. Now, he was the first to eulogize it.

"It’s a little disappointing," he told the crowd. "Not a little — very disappointing for us, and all of you, that we’re not bringing an MLS team to St. Louis right now."

For those in the ballroom, the prospect of the MLS team setting roots in St. Louis had felt like a dream come true, a chance to bring an exciting, on-the-rise sport to a city still reeling from the 2016 departure of the NFL's Rams. All it would take was passing two ballot propositions: a sales tax increase and separate measure that would dedicate the revenue of a business tax hike toward the stadium construction. But while voters gave easy passage to the sales tax increase, they refused to earmark the stadium money.

Kavanaugh passed the mic to Paul Edgerly, a billionaire executive for the Boston-based venture capital fund Bain Capital Group. Edgerly, like the other three men on stage, had just watched months of work vanish, not to mention $1.18 million spent to persuade voters that a stadium would be a solid investment for the city.

In the audience, the members of the St. Louligans leaned against each other in shared grief. The homegrown soccer fan club regularly fills sections at World Wide Technology Soccer Park in Fenton, which is home to the minor league soccer team Kavanaugh founded two years ago. No one wanted an MLS team in St. Louis more than the St. Louligans. 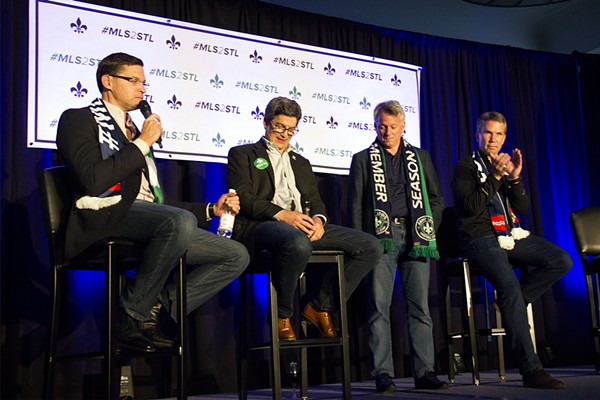 When the mic was passed to Terry Matlack, the crowd began showing its impatience with platitudes. Like Kavanaugh and Edgerly, Matlack (who runs a Kansas City investment fund) thanked the volunteers and noted that he'd been inspired by their passion and friendship.

"Sometimes, it's whether you win or lose," said Matlack, searching for yet another layer of silver lining. "But," he continued, "sometimes it’s who you get to know along in the journey. Thank you all for joining us on this journey, thank you for believing in us, thank you for hoping with us and, is it exactly how we hoped it would turn out? You know what, tomorrow’s another day."

From the crowd, a voice shouted, "Fuck!"

And if the St. Louligans were feeling heartbroken, Dave Peacock was feeling it too. A former Anheuser-Busch executive and current chairman of the St. Louis Sports Commission, Peacock had presided over the 2015 attempt to keep the Rams from bolting for Los Angeles, and in return he'd watched a $1 billion riverfront stadium proposal rejected, brutally, by team owner Stan Kroenke.

That is to say: Peacock ran out of platitudes a long time ago.

"Well I’m just pissed, I don’t care what what these guys say," Peacock joked as he took the mic. His intro was met with laughter and applause from an audience that recognized its own pain.

"We knew this would be close all along," Peacock said. Voters had been asked to divert $50 million in new tax revenue toward building the stadium, which was expected to cost between $155 million and $200 million. Another $10 million in public money would have been added through TIF funding.

Ultimately, 30 percent of city voters came out — a surprisingly high percentage (higher than the 28 percent who voted in the hotly contested March primary). And 30,603 voted no on Prop 2. Just 3,300 votes separated the soccer fans from victory.

For Peacock, who has now witnessed a stadium plan collapse twice in less than three years, the successive losses indicate that St. Louis residents needs to step up their game if they want to save their city. They need to "get off their ass" and do something, he said.

"It doesn’t have to be soccer. It could be whatever you want. But to me, people sit on the sidelines, chirp and bitch, and they don’t do anything."

But even as the crowd applauded, the finger-pointing had already begun. On Twitter, the #MLS2STL hashtag became a gathering place for invective directed at the city's voters and questions about whether Kavanaugh and the ownership group had done enough — though another culprit was being floated as well: the division between St. Louis County and St. Louis city.

Indeed, the fact that St. Louis city residents were expected to foot the bill for a stadium intended to draw regional interest, without a single cent of county money, proved to be an insurmountable flaw in the ownership group's sales pitch. There was no way around the inequity, and it would have diverted $50 million of city tax revenue with only the promise of repayment decades down the line.

In an interview after the concession speeches, Kavanaugh told the Riverfront Times that he'd discussed the stadium project with St. Louis County Executive Steve Stenger, but the talk of county buy-in went nowhere. The county, Kavanaugh said, was simply not interested in paying for a stadium located in downtown St. Louis.

"I think the political structure that we have here in St. Louis can be counter-productive to getting big things done like this," he said. "There’s different agendas and different initiatives. If they were working as one team, then maybe we would have moved it forward."

And that suggests that, for now, St. Louis will have to make its own way — with two professional sports teams, several rebounding and revitalized neighborhoods, a federal monument that is indisputably a marvel of the modern world and an incoming class of progressive city leaders wielding momentum that hasn't been seen here for decades. And because voters actually passed the sales tax increase, the fact that there's no stadium to vacuum up the funds means the money, about $4 million annually, will be a force for city improvement, and not just civic pride or a tourist trap.

That's little consolation to the St. Louligans and soccer fans. But for many city residents — or at least some 30,000 voters — the stadium proposal's defeat feels very much like a win.