If you're a St. Louis voter wondering about the benefits of committing $60 million of public funds to an MLS stadium, you've had little choice but to rely on the only resource offering a detailed financial analysis of the plan: the "economic impact study" commissioned by SC STL, the very ownership group pushing the stadium project.

According to the study's estimates, a pro soccer team playing next to Union Station would generate about $77 million in revenue over the next 30 years, accounting for hundreds of temporary and permanent jobs, and creating a tidy gain of $17 million for the city's coffers.

The study, which was produced by St. Louis-based consultancy firm Missouri Wonk, has been regularly touted by SC STL and its supporters in preparation for tomorrow's general municipal election, which will determine whether St. Louis diverts tens of millions of new tax revenue to the stadium.

But fundamental questions remain about Missouri Wonk's rosy conclusions. In fact, the only known independent analysis of the soccer stadium's economic benefits arrived at a much different set of numbers.

The report was generated in mid-January by the St. Louis Development Corporation, or SLDC, the city's nonprofit economic development arm. The office administers tax increment financing and other public outlays for private projects.

And its analysis nearly destroyed the stadium deal before it ever got close to the ballot box. The SLDC report concluded that Missouri Wonk's predictions for the project's impact — particularly the expected revenue from food and beverage taxes, city and local sales taxes, and earnings taxes — were millions higher than even the city's most optimistic projections.

But though it was produced more than two months ago, and was shared with members of the Board of Aldermen's Ways and Means Committee, few outside of the committee knew of its existence. It has not been publicly disseminated — until now.

An email thread obtained by the Riverfront Times shows that the report only surfaced late last week after repeated requests by Alderwoman Cara Spencer, who does not serve on Ways and Means. The SLDC document was subsequently provided to the RFT by Team TIF, a group of progressive activists who oppose lending public support to an ownership group of wealthy private equity managers and corporate executives.

Maggie Crane, a spokeswoman for the mayor's office, defended the report's limited release, noting that it played a key role in Ways & Means' negotiations with the project's backers. After those negotiations, she notes, many details in the project changed — making it outdated for anyone analyzing the current deal.

Yet some of the city's critique of the Missouri Wonk numbers remains relevant even with the updated plan.

For instance, the Missouri Wonk's predictions cited by the January SLDC analysis predicted that a 20,000-seat stadium built at a cost between $155 million to $200 million would generate about $48.3 million in city and local sales taxes over 30 years. That revenue prediction topped the city's "aggressive" estimate by a full $8 million.

Taking the city's middle-ground prediction, the gap in expected revenue widened to $17 million. "These differences," the SLDC report noted, "are primarily a result of Missouri Wonk assuming significant multiplier supply chain effects." The multiplier effect hinges on the idea that a big expenditure, like a stadium, would cause other investments and lead to more development, compounding its impact.

However, despite the later changes to the stadium project referenced by Crane, Missouri Wonk's updated predictions for the sales tax revenue remain virtually unchanged, at $48.9 million. That is to say: Missouri Wonk hasn't changed its underlying assumptions about the sales tax since January — and it's those very assumptions being challenged by SLDC's "outdated" analysis.

"All analysis done by different entities will be different based on the assumptions used," Crane says in an email. The SLDC used a "very conservative approach" and did not include the benefits of the "multiplier effect" and the "externalities associated with the project," she says, such as the ownership's group recent commitment to a Community Benefits Agreement and the "status of MLS in St. Louis and associated marketing that would otherwise not be available." Even the SLDC's own executive director, Otis Williams, believes the agency's study is not relevant, Crane says.

Crane did not respond to follow-up questions yesterday asking why the city did not do a formal analysis of the revised project.

Alderwoman Christine Ingrassia, the bill's sponsor, says she believes changes to the project — which happened after she killed her original bill — left the SLDC's study obsolete. After all, eleventh-hour negotiations eventually cut the city's investment and added new revenue in the form of a ticket tax and TIF money taken from a portion of the stadium site that overlapped with the NorthSide development project. The amended bill also included requirements that the ownership group cover construction-cost overages, and it restricted the project from dipping into the city's general funds. The bill eventually passed out of committee, but just barely.

"I would have never been comfortable with those original numbers as part of the deal for an MLS team," Ingrassia said an interview Sunday. "When the bill passed out of committee, this became something that was revenue generating for the city, and before we were at a loss."

Asked why the city didn't do more to publicize the SLDC analysis months ago, Ingrassia maintained it was no cover-up, just a reflection of changing facts on the ground.

"Those numbers were updated," she pointed out, contending that the significant tweaks in the bill made the SLDC's previous projections obsolete. The SLDC analysis, she said, "wasn't hidden by any stretch of the imagination."

And regardless, Ingrassia said she's done her own research on Missouri Wonk's projections and spoke with the analyst who compiled them. She trusts its economic projections and believes the SLDC's estimates may have been too conservative. 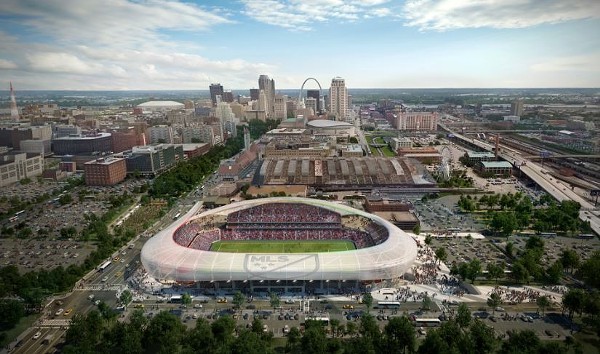 It's worth noting that Missouri Wonk states that its analysis is based on data provided by two sources. First is the ownership group itself, a group that counts among its members former Anheuser-Busch executive Dave Peacock, the same guy who helmed the failed push to build an NFL stadium to keep the Rams in St. Louis.

And MO Wonk's second source of data? That would be the St. Louis Sports Commission, whose current chair is... oh, it's also Dave Peacock.

That's not to say Missouri Wonk is twisting its projections, but it's just one more example of the tangled connections between the private and public entities supporting the stadium project.

In an emailed statement, SC STL spokesman Jim Woodcock defends Missouri Wonk's economic impact study, and notes that the city itself trusted the firm to perform a 2015 analysis on the planned relocation of the National Geospatial Intelligence Agency's western office to north St. Louis.

"We stand by its projections," Woodcock says. He called Missouri Wonk's analysis "a benchmark" for the eventual agreement between the Board of Aldermen and the ownership group that resulted in a "lower, more balanced City participation in the project with few risks to the City."

For Team TIF's Andrew Arkills, a critic of the project, the end result looks very much like an ownership group cornering the market on information. That's a problem for city voters trying to figure out if it's worth it to build a sports stadium that will take decades before it even breaks even, let alone leads to a net gain in revenue.

"When you’re asking for public funds and the only analysis that is being floated is by the people asking for the money, to me, that raises a red flag at the very least," says Arkills, a data analyst and neighborhood activist in Tower Grove South.

He points out that the latest Missouri Wonk analysis of the plan shows virtually no change in its $48 million sales tax estimate, the same one the city analysis suggested was nowhere close to the reality. The current study also retains use of the "multiplier effects" to predict expansive economic growth.

"I would prefer to see a public body or an independent body to make an independent financial analysis," Arkills says, "to make sure that the final analyses the owners paid for aren't overly rosy to make the math work."

Editor's note: We updated this story one hour after its original publication with an additional paragraph about what parts of the study remain unchanged.