Update 5:52 p.m. - Police have identified the man killed at Loy-Lange Box Company as 59-year-old Kenneth Trentham of the 4500 block of Tholozan Avenue.

Update 4:10 p.m.: A person who was crushed beneath a piece of a falling boiler is on life support, and another badly injured person at the site of the initial blast was undergoing surgery this afternoon, St. Louis Fire Chief Dennis Jenkerson told reporters during a 3 p.m. news conference.

The original story below has been updated with additional details. 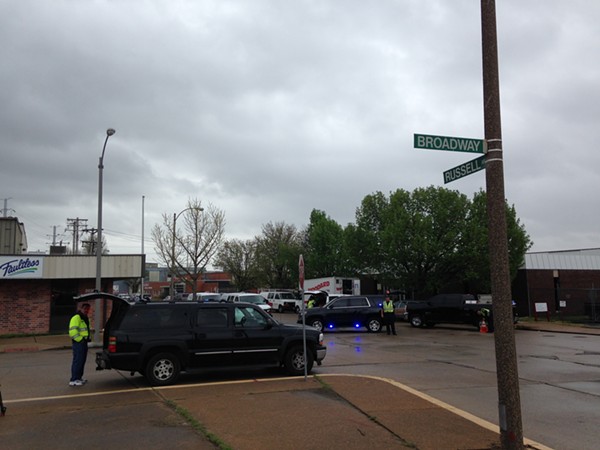 Three people were killed and four others injured on Monday morning when an industrial boiler exploded, sending a massive, tube-shaped piece rocketing through the roof of a factory building on the edge of Soulard and crashing down into another a block away, authorities say.

Fire and police investigators spent the morning the near intersection of Broadway and Russell, working across the sprawling scene of the tragedy. The initial blast occurred about 7:30 a.m. at the Loy-Lange Box Company (222 Russell Boulevard). That's where the first person was killed and another was badly injured; two more died and three others were hurt at Faultless Healthcare Linen (2030 S. Broadway), where the massive hunk of metal landed.

The initial emergency calls came in as a building collapse at Loy-Lange, St. Louis Fire Chief Dennis Jenkerson says. As firefighters began to arrive, more calls flooded in, describing collapses at Faultless and across the street at Pioneer Industries, where another long, pipe-shaped piece of the boiler came down through the roof like an arrow, severing the water and electrical lines.

"That's an impressive explosion," Jenkerson says. "For more people not to be injured by this was just a miracle."

Thoughts and prayers for the victims of the boiler explosion at Russell and S. Broadway, their loved ones and coworkers. #fgs

Clusters of workers and emergency responders could be seen gathered outside the buildings throughout the morning. A Fox 2 helicopter filmed the scene from above, revealing massive holes in the roofs of both buildings.

The boiler was about four feet wide and ten feet long, Jenkerson says. He later estimated the weight at least a ton or a ton and a half. Jenkerson says firefighters found a person badly hurt but still alive crushed beneath the still-hot boiler in Faultless when they arrived. That person and another from Loy-Lange were rushed to the hospital in critical condition. Two others were also hurt, but authorities say they're expected to survive.

The area of the explosion is a stretch of industrial buildings and truck yards just east of Seventh Boulevard in the Kosciusko neighborhood. Police blocked the streets until just before noon.

A worker across the street from Loy-Lange at a dental supplies factory says the blast shook their building with such force that interior doors opened all at once and slammed shut.

"It sounded almost like a sonic boom," Connie Murphy, who works there at Pemaco Inc., tells the Riverfront Times. "It was like 'Bam!' and everything shook."

She says they went outside to find dazed Loy-Lange workers spilling out of the building.

The Loy-Lange building has been condemned as the city Building Division investigates. Jenkerson says so far it appears that inspections on the boiler were up to date. Powerful boilers are common in St. Louis' cache of aging industrial buildings. As a result, they're rigorously inspected, the fire chief says.